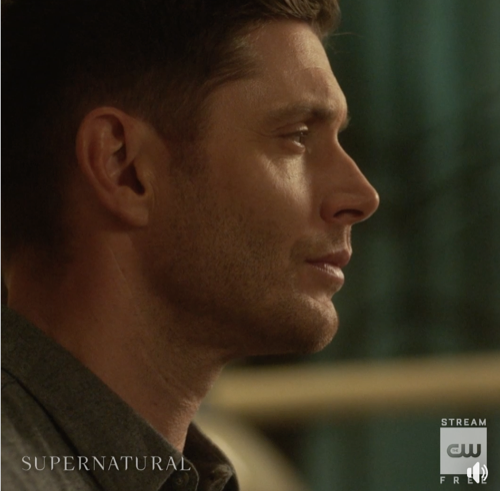 Supernatural airs tonight on the CW with an all new Thursday, November 15, season 14 episode 7 called “Unhuman Nature,” and we have your Supernatural recap below. On tonight’s Supernatural episode as per the CW synopsis “Sam and Castiel track down a Shaman who may be able to help a friend.

Nick continues to spiral down a dark path as he looks for answers surrounding the deaths of his wife and son. Jack turns to Dean for help enjoying the human experience.”

Nick is torturing a priest to get answers about Arty. Meanwhile, Cas tries to heal Jack while Sam and Dean wait outside the room. Cas comes out. He is trying but it isn’t working. They all head in to see Jack on the ground, bleeding and foaming at the mouth. They rush him to the ER. The nurse asks for name, date of birth and family history. They all struggle to give her information.

Nick meets with a crime reporter he knows to talk about his family with her. He is out for revenge and is looking for anyone who knows something.

The doctor tells Cas, Dean, and Sam that they don’t know what is wrong with Jack. His tests are negative but his body is shutting down. After waiting and hearing no news on what they can do to help Jack, they leave the hospital.

Sam calls Rowena and tells her that Dean is sick. Rowena arrives and Sam has to tell her the truth, they need help with Jack, Lucifer’s son. She wants to leave but they talk her into staying. After she looks him over, she tells them Jack’s cells are gobbling each other up now that he doesn’t have his grace. Dean begins feeling dizzy while Rowena tells them that Cas cannot help by offering his own grace.

Nick is hanging out on the street. A prostitute tries to talk to him and he becomes angry, telling her to get away.

Dean comes in to give Jack a snack. He is packing. He is on his way to Vegas or maybe Tahiti. He wants to live before he dies.

Dean comes out to talk to Sam, Cas, and Rowena who are making phone calls to get help for Jack. Sam thinks he can get a shaman to help. Dean starts to get dizzy again. Jack comes out. They are taking off. Sam asks them if its a good idea. Dean thinks so. They head out to get burgers. Dean decides to teach Jack how to drive.

They hit the open road. Dean tells Jack he is doing just fine. He gets some confidence and keeps driving. Dean tells him to open it up.

Sam and Cas talk about Jack and how hard this is. They have lost people and Dean was mean to Jack in the beginning but now its like they are losing a son.

Jack and Dean stop to eat again and talk. Meanwhile, Nick tracks down the cop who was at his house the night his wife and son died. A former cop now, Frank answers the door and pretends he doesn’t remember anything. Nick lunges at him.

Dean and Jack go fishing. Jack tells him to forget Tahiti, life is about moments like this and who you spend them with.

Cas travels to visit Sergei, a healer. He tells him about his nephew Jack. Sergei tells him he can help. He has Gabriel’s grace. He brings it out. Cas asks him what he wants. He only barters his skills. The Winchesters will owe him, he tells Cas.

Nick has Frank strapped to a chair. He is punching him as he asks him questions about the night his family died and how Arty saw someone leave the house, a friend. Frank breaks and admits that he was called to the home after the wife called about a possible prowler. When he arrived a man named Abraxis jumped him on his way in. The next thing he remembers was waking up in his patrol car covered in blood. He was out of his mind. Nick sympathizes with him for a bit but tells him he still killed his family. Nick kills him.