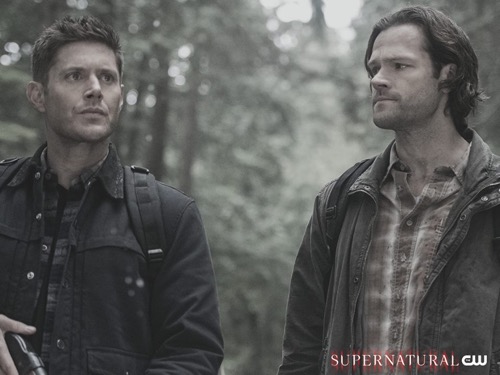 Supernatural airs tonight on the CW with an all new Thursday, May 3, season 13 episode 21 called “Beat the Devil,” and we have your Supernatural recap below. On tonight’s Supernatural episode as per the CW synopsis “Sam, (Jared Padelicki) Dean, (Jensen Ackles) Castiel and Gabriel must work together if they have any hope of bringing Mary and Jack home. Meanwhile, Rowena’s encounter with Lucifer may alter the outcome of the journey for one of the heroes.”

Sam missed his family so much that he was dreaming about the day they’d be reunited with Jack and Mary on tonight’s all-new episode of “Supernatural”.

Unfortunately, dreams were no longer enough for him nor were they ever for Dean. The two had tried opening the rift with Castiel, Rowena, and Gabriel’s help, however, Gabriel hadn’t had enough archangel grace in him. He had given the others a small sample and it hadn’t opened the rift like they all hoped. It had actually been a bit of a couple of blinks before nothing and so Castiel decided to be blunt about their dilemma. He said that Gabriel was going to need time that they didn’t have to come up with some of that grace and that there was another source they could turn to get what they needed. Castiel suggested they use Lucifer and the boys had been quick to say “no”. They had tried to work with Lucifer before and that time had been a bust as well.

Castiel could see that the boys needed more convincing and so he took them out of the room to discuss things amongst themselves. They were going for perhaps a few minutes and when they returned they ended up walking in on a scene between Rowena and Gabriel. The latter two almost had sex in the library and hadn’t done a lot to cover up that they almost had sex in the library. So it was awkward for pretty much everyone, but they soon returned to business and Castiel had done his job. He told the boys that Lucifer never stopped being their responsibility and that they were always going to have to confront him. They hadn’t liked that and had only gone along with it because they knew that Castiel had been right.

The boys agreed to get Lucifer and they allowed Gabriel to be the one to set the trap. Gabriel appeared to Lucifer as a bartender and drugged Lucifer with one of the many beers he served him. Thus the next thing Lucifer knew, he was trapped in a bar and Rowena was able to bind his hands. She and Gabriel had had fun entrapping Lucifer and Lucifer had been left confused because he could have sworn that he killed them both though as it turns out he hadn’t killed them for good. They brought him back to the bunker and they started to drain him. His grace had enough to open a portal and so they the boys had gone in while Rowena had stayed behind. She said she would keep a close eye on Lucifer and instead she let him get into her head.

Lucifer started to sing very loud to bother her and when that hadn’t worked he then moved on to something else. He started to talk about finding her that day and how he thought she was going to put a fight. Lucifer also claimed to be disappointed when he was able to kill her so easily and so that had been enough to get Rowena to return the favor. She told him that his grace was going to allow the boys to reunite with their family. Rowena told him how Mary and Jack were through the rift and how he couldn’t wait to see either of the boys because they were the only fathers he knew, so she got him so upset that he was able to break out of his bind and attack her. Rowena had thankfully had one last spell to use and it was just poor luck that spell threw Lucifer into the rift. Which meant she threw him right at the boys.

Rowena knew she made a mistake the moment it happened. She figured she could run and no one would ever know what she did, but she couldn’t do that to the people she left at Lucifer’s mercy and so she started looking for a way to keep the rift open even without Lucifer’s sustaining grace. It was while she was doing that, the boys were learning what it was like in that other world. They were coming across vampires that didn’t look like vampires and so they made an alliance with a couple of survivors they met. This couple said the only way up north (which was where they figure Mary was with Jack) was through the underground tunnels and so the boys said they could work together to make north.

They went into the tunnels and they ended up fighting against a nest of those new vampires. The new vampires looked different because they were starving and so, of course, they attacked the group. The group tried fighting them off and sadly they lost two of their own. They lost half of the couple that joined the boys on their trip and they lost Sam. Sam had gotten bitten and carried off before the others could go after him. Dean still wanted to go after his brother and so it had been Castiel that stopped him. He told Dean that it was too late for Sam and that they had to get out of the tunnels while they were still time, so they left Sam’s body behind and got the hell out of there. They later ran into the outpost and were reunited with their family. And so they all mourned together when Mary and Jack found out Sam died.

Jack hadn’t been able to believe it. He had asked Castiel why he hadn’t brought Sam back and Castiel said he hadn’t had enough in him to do it. Castiel was in the middle of apologizing to Jack for not being strong enough when it counted when they all sur5prised to see a newly returned Sam. Sam had been brought back to life by Lucifer. Lucifer realized the only way to be part of his son’s life was to present himself as a hero and so he demanded that Sam introduce him as the man that brought him back from the dead. Lucifer shouldn’t have had enough power himself to perform the Lazarus trick and so he wanted the fact he ate several of Michael’s angels to get that power to remain a secret. A secret between him and Sam.

Sam hadn’t wanted to do anything for Lucifer.

He had only done what he did because Lucifer was the only way he could get away from those vampires.

So Sam had been a little ashamed of himself when he finally reunited with his family because he knows he didn’t do them any favors by bringing Lucifer back into their lives.