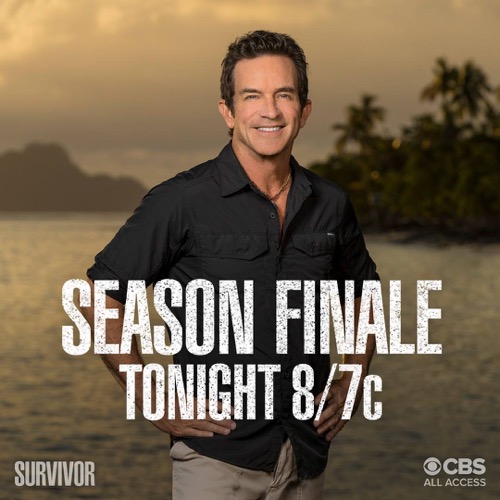 Tonight on CBS Survivor: Ghost Island airs with an all-new Wednesday, May 23, 2018, Season 36 Episode 14 Finale and we have your Survivor recap below. On tonight’s Survivor season, 36 episode 14 called “It is Game Time Kids,” as per the CBS synopsis, “In the Season 36 finale, castaways try to navigate their way to immunity when facing the biggest maze in the history for the game. Also, a fire-making challenge could change one person’s fate in the game, and, after 39 days, one castaway will take home the $1 million prize and title of sole Survivor.”

Domenick thinks Donathan went bananas at Tribal Council; he basically said he was declaring war and wanted nothing further to do with his alliance.

Meanwhile, Sebastian is getting sick of sticking with the big boys and living in their shadow, he thinks he may be ready to make a big move.

Wendell and Domenick want to get rid of Sebastian next because they don’t think Donathan is a threat.

Time for the Immunity Challenge and today they are going to race through the largest maze ever on Survivor, collecting bags of puzzle pieces along the way. Once they’ve collected all the bags, they use the pieces inside to solve a puzzle. The winner is guaranteed a 1 in 5 chance to win the whole thing. The winner will also have a steak dinner which will include desert waiting for them back at camp.

Domenick and Donathan are trailing behind. Domenick has caught up, Wendell is in the lead and he wins individual immunity. Wendell gets to enjoy his steak dinner and has an opportunity to choose someone to join him, he picks Sebastian. Jeff tells him to pick one more person, he picks Angela who is pleasantly surprised. Laurel roles her eyes, she is livid that Wendell took two of her worst enemies.

Wendell is very happy that he won individual immunity. Time for the feast, Wendell feels horrible that he may be blindsiding someone at Tribal Council, but this is a game. Seems like Donathan is going to go home, Sebastian plans on using his extra vote tonight.

Meanwhile, back at camp, Laurel is still livid. She tells Domenick she doesn’t understand why Wendell took Angela and Sebastian. Domenick thinks the decision Wendell made absolute sense for their game. Donathan tells Sebastian that nobody has talked game with him so he thinks that he is the target. Sebastian confides in Donathan, tells him that he wants to take out Domenick and he has an extra vote. Domenick is alone with Angela, she tells him that Sebastian has an extra vote and they are gunning for him. Domenick says he has two idols, although we know he only has one, and he is taking care of himself. Donathan goes to Laurel and tells her that Sebastian has an extra vote and wants to take out Domenick.

Time for Tribal Council, day 36 with only 6 remaining. Laurel tells Jeff she feels the pressure at camp because people are wondering if they should play big or safe. Donathan, on the other hand, says nobody has spoken game with him so he thinks that he is in trouble. Sebastian tells Jeff that Donathan could go home. Domenick jumps in and says he doesn’t buy it, he believes there is something going on. Domenick asks Donathan if he is working with Sebastian and his extra vote to come at him, Donathan says no. Domenick shows his two idols and tells Donathan to do his worst. Donathan says he is playing his own game. Wendell pulls out his idol too. Wendell and Domenick obviously feel threatened. Domenick makes us think he gives his real idol to Jeff.

Time to vote, Domenick tells Jeff that he gave a fake idol. Three votes for Sebastian, two for Donathan. Sebastian is voted out.

Day 37 and time for another Immunity Challenge. Today they are going to swim to a platform, climb up and slide down, then make their way through a series of obstacles and collect puzzle pieces along the way. Once the reach the finish they will have four pieces to solve a pyramid puzzle.

Out of nowhere, Wendell quietly completes the puzzle and is safe at Tribal Council.

Domenick can’t believe he has lost the edge on Wendell again but is happy that he has his real idol. Domenick speaks to Donathan and asks if he would go to the end, who would he take with him. Donahan is desperate at this point and tells him that he would like to go to the end with him. Laurel tells Domenick and Wendell that she doesn’t feel safe, in fact, she is at their mercy. Domenick tells her that there is one worry, that if she did win, she would take Donathan with her to the end.

Domenick and Wendell are alone, they talk about letting Laurel go home.

Time for Tribal Council. Laurel tells Jeff that they are all nervous except for Domenick and Sebastian who are running the show. Donathan agrees it is all about what is best for Domenick and Sebastian’s game. Time to vote, Domenick gives Jeff his immunity idol, it is a real one. Wendell says that someone reminded him of his sister in the game, Laurel, he gives her an immunity idol because he says he promised her. The votes for Donathan is enough, he is voted out.

Time for the very last Immunity Challenge. Today they are going to balance on a wobbly beam where they are going to use a long pole to stack balls on stands. If at any point their stack falls, they start over. The first person to stack all six balls wins. Domenick loses everything and has to start over again while Wendell is on his fifth ball. Laurel drops and she has to start over. Wendell has one ball left, he loses everything, the stack falls. It is now Angela in the lead. Angela drops and now it is Domenick is in the lead. Laurel drops everything again. Domenick has to put on his sixth ball, he does it and wins immunity and a guaranteed shot at the final tribal council.

Domenick has a big decision to make, who sits next to him in the last Tribal Council. And, which two will have to battle it out in a fire making showdown to earn it. The four are going to Ghost Island one last time where the three will get to plead their case to Domenick. In addition, Domenick has one final task, Jeff hands him a scroll and tells him to read it in private.

The four arrive at Ghost Island, Wendell is depressed and knows Domenick won’t choose him to sit with him. Domenick talks to everyone but still hasn’t made up his mind. He approaches Angela and asks her how she would feel going against Wendell because she knows how to make fire. Angela tells him it is a mistake, if he goes to the end with Laurel, he will lose because everyone loves her.

Domenick goes off on his own to read his note. The note tells him that he has one more decision to make, who to take with him. There are three urns, he has to choose one of the voting urns to take with him. He chooses the Cagayan urn.

The three return to camp and find food, all three are confident that they can win.

Time for the final Tribal Council. The three have outlasted 17 other people. Kellyn asks the first question: what was there plan coming and how were they going to play the game. Laurel says that she wanted to play a physical game but landed in playing more of a social game. Laurel says that she made all the decisions with Domenick and Wendell. Wendell chimes in and say that he invested a lot of time working on his social game. Furthermore, he says that he protected Domenick. Chris wants to know who was the real mastermind, Wendell says it was him and Domenick laughs. Wendell says he pulled in Laurel, Donathan says no it wasn’t him. Domenick says there was no mastermind and he made every decision for himself. Jeff tells Laurel to pitch herself that she outplayed the other two. Laurel says she didn’t feel that she had to outplay the physical challenges to improve her game. Wendell goes on to say how he did things around camp to make everyone comfortable. Wendell then says he gave his idol to Laurel because he wanted to do everything he could to be loyal to her. Domenick explains why he played a fake idol; Sebastian cuts in and says it was brutal the way he and Wendell brought out their bling, they didn’t need to do that. Now we move to the outlast – Laurel says that if she took out Domenick or Wendell she would not have made it this far in the game. Domenick says that he did a lot of things that were unpopular but he played a hell of a game. Wendell gets the last say, the first thanks everyone for letting him live his dream; he tried to play a clean game although there still a lot of things he is apologizing for.

We are now in Hollywood and Jeff asks a young girl in the audience, her name is Samantha, to write down on parchment paper who she thinks is going to win.

Back to Tribal Council and it is time to vote. The jury has to choose who they think she wins the title of sole survivor and the million dollars.

Jeff is back in Hollywood with everyone. Jeff takes out the vote, the winner of Survivor Ghost Island is Wendell. Wendell’s family joins him on stage, Jeff gives him the million dollar cheque.

Jeff asks Michael where he gets his energy and maturity at 18 years old; Michael credits it to his family. Chris tells Jeff that he buried the hatched with Domenick and they recently did an MS walk together.

Jeff gives a preview of the next Survivor. Season 37 is David vs. Goliath. The Davids, ten people who share one thing, overcoming adversity; it’s the only thing they’ve known. Then there are the Goliaths, ten people who also share one thing, capitalizing on their advantage and use it to squash their opponents. This new season is coming in the fall.