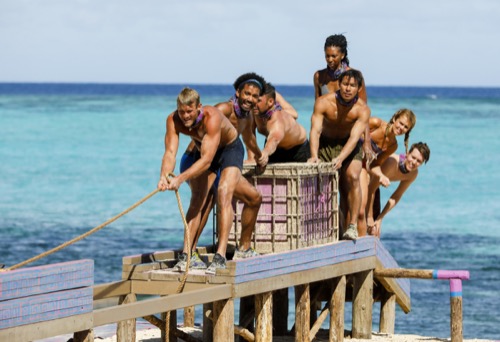 Tonight on CBS Survivor: Ghost Island airs with an all-new Wednesday, March 7, 2018, Season 36 Episode 4 and we have your Survivor recap below. On tonight’s Survivor season, 36 episode 4 called “Trust Your Gut,” as per the CBS synopsis, “Castaways get physical during a classic water challenge, and a pair of castaways on the outs tries to shake things up.”

Angela is unhappy that Domenick and Wendell voted for her. Domenick tells Wendell that he in fact has a real idol. Domenick looks down at the bottom of his bag the next morning and he finds the legacy advantage willed to him from Morgan. Domenick already found the idol, but he is really happy that another advantage landed on his lap.

Time for the Reward Challenge, Chris has returned from Ghost Island. The tribe mates have to swim out to retrieve ring, they then have to race back to their flag pole while the other tribe tries to stop them any way they can. The first person who has one hand on the ring and one hand on the flag pole wins. Today they are playing for a little piece of home, peanut butter, jelly and milk. Chelsea sits out for Malolo because they have too many players.

Naviti wins reward and now they have a big decision, they have to send one person from the Malolo tribe to Ghost Island; they decide to have them draw rocks; Kellyn loses and is on her way to Ghost Island.

Kellyn arrives at the game of chance – she decides not to go for it. Chris is back at camp and on a campaign to get rid of Domenick. Laurel is worried, she doesn’t want Chris calling the shots on the tribe, Domenick tells Laurel that he has the idol – she surprised the heck out of him, he didn’t think she would be willing to work with him and Wendell.

Time to get to the Immunity Challenge. Today they are going to swim out to a bamboo cage, climb over and dive down, untie a cord and drag a heavy chest back to shore and across a track. Once they arrive at the finish and use the balls inside and land them on a narrow perch. The first team to land all five balls will win. Malolo sits out Desiree because they have too many on their tribe.

Naviti wins immunity, what a comeback. Malolo is heading to tribal council, someone will be the fourth person to be voted out. Bradley is happy, he thinks he has the power with his alliance tonight. Stephanie is frustrated, she has so much more game to play and hopes she has another day to play.

Chelsea is worried that maybe one of the original four of the Malolo may have an idol so she thinks it is better strategy to vote out one of the guys. Brendan knows he is in a tough spot – Michael has an idol and knows he has to play it right in order to save his alliance of four. At tribal council, Jeff asks Desiree if it was uncomfortable because there are 5 original Naviti, she says yes. Michael says the Naviti five are strong, but there are people on the bottom. Naviti says they are at war and know they have the numbers.

Michael announces that he has an idol and if anyone wants to align themselves with the original Malolo now is the time to do it. It’s time to vote, Michael at first tells Jeff that he is playing the idol for he and Brendan and then he says no, he is playing it for Stephanie. In the end, It is tie, four votes Bradley and four votes Brendan – the last vote is for Brendan, he is sent home.