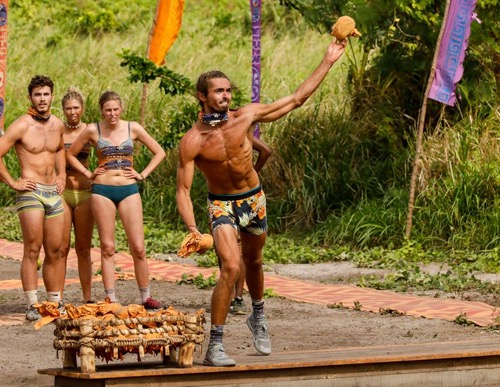 Tonight on CBS Survivor: Ghost Island airs with an all-new Wednesday, March 21, 2018, Season 36 Episode 5 and we have your Survivor recap below. On tonight’s Survivor season, 36 episode 5 called “A Diamond in the Rough,” as per the CBS synopsis, “One castaway attempts to rekindle relationships after duping their tribe.”

Sixteen were left on tonight’s all new episode of “Survivor” and a lot of people were taking notice of Michael after his gamble at the last tribal council.

Michael had tried to use the idol to keep him and his team safe from elimination, but unfortunately he ended up losing one of his closest allies in Brendan. Brendan had gotten eliminated and the Minority Alliance had been left short of one person. So the others could have looked at what Michael tried to do and ignored it only they realized how close Michael came to pulling his stunt off and that made them weary. They hadn’t realized that Michael was anything other than a jock and some had even stated in their confessionals that they thought he was pretty empty-headed. They had all written off Michael to that point and his stunt changed everything.

The teams had talked when they got back from the Tribal Council and they all told Michael how he surprised them though he had tried to downplay it. He said that had just been an idea and that he didn’t have anything else to work with the next time. And the others hadn’t been too sure about that. They questioned if Michael was trying to lower their expectations so that they wouldn’t see him coming the next time and therefore his gamble at the Tribal Council had put him in the crosshairs of several people. They learned the hard the way that Michael was smarter than they looked and so they tried to pay attention to him going into the next challenge.

The next challenge was the Reward Challenge. Each tribes were offered the opportunity at winning coffee and pastries as a reward yet in order to receive that reward they all had to run the course. The course was climbing, lifting, throwing, and it was basically a test of endurance as well as skill. It was a test and the only winners in this particular course was Chris. Chris played baseball and was a pitcher in college, so he had no problem with throwing miniature sandbags at a small target. The other team couldn’t get one throw while Chris hadn’t had a problem at all. He threw sandbags at a target that led to raising of the flags and he won the Reward Challenge for the Naviti tribe.

The winning tribe had also be given the task of choosing who would go to Ghost Island and they decided to rely on the rocks. The Malolo tribe shifted through a bag of rocks and that’s what ultimately decided that Stephanie would get to send to Ghost Island. Stephanie of course had lamented what happened to her and she had hoped she could find something that could help her tribe on the island, but no such luck. She didn’t receive anything and so she had nothing to return to her tribe when she returned for the Elimination Challenge. This Elimination Challenge offered the chance at opportunity and all they had to do to qualify for was run the course.

The course for the last challenge tribe was on the tougher side. The team had to make it across a bridge with a paddle board however, once they made it on the other side, they had to both get a puzzle and then get pulled back to shore by their team that was still on the beach. Now it had started out really well for the Naviti tribe only someone had fallen on the bridge and that had allowed Malolo tribe to catch up. And so things were head to head for some time until several people in the Malolo tribe either fell off the bridge or lose control of their paddle board. That allowed Naviti tribe regain their ground and the only part after the forced swim was the puzzle.

Each team had to unlock a chest filled of letters that spelled out a puzzle and naturally everyone was opinionated. Especially the Malolo tribe who fought each other over what the puzzle was supposed to mean while the other tribe all just worked together, so it hadn’t surprised a single person when Naviti tribe one the second challenge as well. They’ve been having a lot of good luck and it didn’t look like it wasn’t going to end anytime soon even if things were all hugs and friendships behind the scenes. There was actually a plot amongst the Naviti tribe to get rid of Chris and it seems the plot was merely coming from two people.

But the two were recruiting others and so the Naviti tribe were already suffering some infighting while on their winning streak. It hadn’t made sense, but that’s the game and the Malolo tribe wasn’t any better. They initially wanted to vote off Jenna because she wasn’t good at the game and Jenna had found it about so she decided to flirt with Sebastian. Sebastian liked that Jenna was flirting with him and that she was willing to help with his hair, so Sebastian tried to talk the others into eliminating Stephanie. Stephanie was sweet and they all liked her except she wasn’t great at the game.

Her tribe though hadn’t known if she came back with an advantage from Ghost Island and so they searched her things. They had wanted to know if they eliminated her that it wouldn’t backfire on them and so they felt safe when they hadn’t found anything in her bag. Only Bradley had also proposed that they eliminate Michael. Michael had seemed like a threat from the very beginning when he showed how smart he was and that left Michael trying to fight for his seat. He went to Bradley and he told him “like, hey man, I’m locked and loyal”. Not many others could make the same claim and so the one person that truly seemed like she could be eliminated was Stephanie.

Stephanie was simply the one person they could all agree on going into the Tribal Council and that’s why it hadn’t shocked anyone when they agreed to vote off Stephanie. She was one of the weakest players and she hadn’t tried to make a case for herself when she had the opportunity. She had waited until they had gone into council and their minds had already been made up by then. There was one Alliance that was calling the shots and Stephanie hadn’t involved with that alliance.