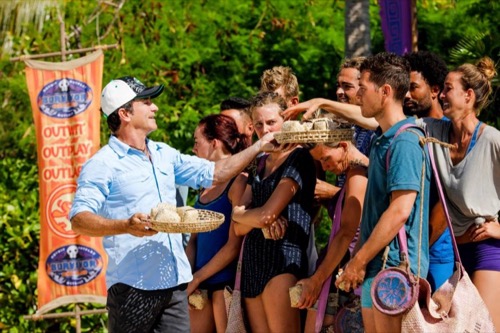 Tonight on CBS Survivor: Ghost Island airs with an all-new Wednesday, March 7, 2018, Season 36 Episode 3 and we have your Survivor recap below. On tonight’s Survivor season, 36 episode 1 called “Only Time Will Tell,” as per the CBS synopsis, “The castaways drop their buffs and switch tribes, and one player sets their sights on one of their own.”

After tribal James felt drained, but he is glad that it worked out. Day 7, time for the Immunity Challenge. Donathan is back from Ghost Island. Jeff announces a switch in tribes, he asks Angela how she feels, she says she feels broken and doesn’t want to switch.

Jeff hands new buffs to everyone, some are purple and some are orange. If they are purple they are Naviti, if they are orange they are Malolo. The switch is a straight swap and sticks to two tribes–Malolo: Jenna, Stephanie, Brendan, Michael, Desiree, Sebastian, Kellyn, Bradley, and Chelsea; Naviti: Domenick, Chris, Donathan, Libby, Laurel, James, Angela, Wendell, and Morgan.

At Naviti, all the original Malolo surprised to arrive at such a nice camp compared to theirs. Donathan loves the better views. Chris is worried because he lost so many tribe mates to the other side and he’s still with Domenick, a teammate that he doesn’t trust at all. Chris tries to bring in Angela and align with he to work against Domenick, but she doesn’t like how he is speaking to her and refuses to go ahead with him. Later, Chris goes to both James and Libby with the same plan and again is attitude is rubbing people the wrong way.

At Malolo, Naviti old members hate everything about the Malolo camp. Stephanie and Jenna start looking for an idol at the Malolo camp, they literally dig everywhere and search in trees. Michael and Brendan start looking as well and Michael finds one of James Clement‘s two idols that he was sadly voted out with. At Naviti, Morgan, and Domenick don’t like how dangerous Chris is becoming – they then bond with Morgan. At the Immunity challenge, the tribes race through an obstacle course with another dreaded puzzle at the end. The reward is a tarp to protect them from the rain and sun. Malolo gets through the first part great, but Naviti catches up. Chris is a little slower than Sebastian at hooking a ball and rope and the tribes finish together, leaving the puzzle to decide which tribe is going to win this.

On the puzzle, Kellyn and Bradley work together well, Malolo wins and takes their tarp. Naviti loses and draws rocks to decide who goes to Ghost Island because they can’t make up their mind. Chris draws the only white rock and he heads to ghost island. At ghost island, Chris is upset that he is missing a huge tribal council and hopes that Domenick gets eliminated. When choosing his clue, Chris gets a “nope. not today.” Back at camp, Angela now doesn’t want to get rid of Domenick and talks to Wendell who thinks it’s sketchy that Angela, won’t go ahead with Chris’plan so he goes to Morgan and they agree that keeping Libby instead of Angela is a better plan. Domenick speaks to original Malolo members and shows them the fake immunity idol that he has; James is not dumb, he knows it is a fake idol.

At tribal council, Morgan thinks her four are strong. Domenick feels really comfortable and is looking forward to new possibilities. Time to vote, three votes for Angela, four votes for Morgan and one vote for Libby. Morgan is voted out.