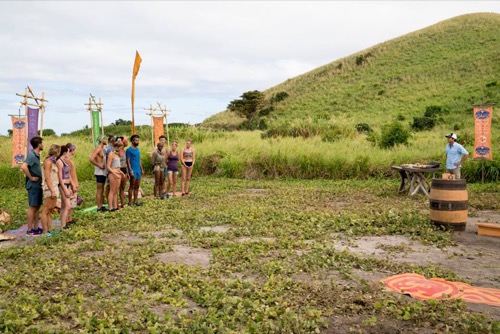 Tonight on CBS Survivor: Ghost Island airs with an all-new Wednesday, April 4, 2018, Season 36 Episode 76 and we have your Survivor recap below. On tonight’s Survivor season, 36 episode 7 called “Gotta Risk It for the Biscuit,” as per the CBS synopsis, “Another castaway is voted out of the game.”

At Malolo Michael thinks the last Tribal Council was utterly depressing when he got rid of James to save himself and now that he is the last Malolo he knows that he definitely could be next. Finding an idol right now would be the most important thing in Michael’s game. Michael starts to look around the beach and the other tribes mates watched what he is doing but Michael doesn’t care. Hard work pays off, Michael found a hidden immunity idol – it is the authentic fake Hidden Immunity Idol that Ozzy created in Survivor’s 16th season Survivor Micronesia Fans vs Favorites, in 2007.

The only three players to ever touch this stick were all voted out, but there is a secret nobody knows. For ten years this stick has been living on Ghost Island slowly gaining power and of this moment it has fully matured into a real Hidden Immunity Idol. Michael is so happy, he is ready to do damage with his new idol.

Time for today’s Reward Challenge, each of the players are going to pull on a rope that is suspending a disk, they will then work together to stack blocks on that disk, spelling reward, if the stack falls they have to start again, the first tribe to finish wins steak, chicken kabobs, spices to make it taste good and a grill to cook it on. The second tribe will win chicken kabobs. The last tribe gets nothing. The winning tribe will send someone from either of the two other tribes to Ghost Island.

All three tribes drop their blocks and have to start over again. Naviti wins the big reward, Yanuya wins second place and Malolo loses again. Kelly from Malolo is sent to Ghost Island. Kelly opens an urn and tells her to follow the fire, it is the Ghost Island game of chance and she has to make a decision to play or not. She decides to play the game and hopes she has the luck of Survivor on her side. Kelly won an advantage, it is the authentic Steal A Vote used to vote out Michaela in Survivor’s 34th season – when Michaela was not chosen to compete in the reward challenge she took her spot on the sit out bench.

Blinded by frustration, she never saw the secret advantage sitting at her feet. Sarah grabbed the advantage and used it to vote out Michaela. This haunted advantage no longer holds the power to steal a vote but you can use it as an extra vote.

Meanwhile, Donathan feels very proud of himself and this is the highest point that he has had so far. Bradley has no patience and claps his hands to get Donathan’s attention – if he keeps treating him like that his days are going to be numbered. Bradley walks away and everyone is talking about him, calling him a nasty B. Domenick is not sure if it is a good idea to get rid of Bradley, depends on gameplay at the time.

Meanwhile, Wendell is happy his tribe mates are full because they all fall asleep and he heads out to look for an idol. Wendell finds a clue to an idol, now he has to find the idol. Wendell has found an idol necklace, the one that Erik gave to Nathalie in Survivor’s 16th season. Erik had made it to the final five and had won this immunity necklace which guaranteed him a spot in the final four. But, the four remaining women bamboozled him into giving up the necklace at Tribal Council and then they promptly voted him out. The necklace has now matured into a hidden Immunity Idol.

Malolo is sick of losing, they tribe burn their Malolo flag to burn the curse. Time for today’s Immunity Challenge. They are going to swim out to a floating platform, race up, jump off and retrieve two sets of floating rings, they will then attempt to land those rings on a floating target. The first two tribes to get all their rings on the floating target win immunity and safe from the vote.

Yanuya and Malolo win immunity, Naviti is heading to Tribal Council. The curse is reversed for Malolo. Back at camp, Bradley wants to vote out Libby. Chelsea tells Libby she is fine, but Libby is nervous that she may be voted out and realizes this is a critical tribal. It really is between Libby and Bradley. It is time for Tribal Council. Bradley tells Jeff it is hard because they are one big cohesive team. Donathan brings up the fact that Morgan was voted out and Domenick is still sore about that.

Libby defends herself and says she stayed true to her alliance and can give someone else that loyalty. Bradley goes on to tell Jeff that he is not argumentative. Domenick explains that in this game you have to bite your tongue a lot. Chelsea thinks that your behavior always affects your place in the game. Time to vote, if anybody has a Hidden Immunity idol it is time to play it, nobody does. The first vote is for Libby, next is Bradley, next is Bradley – the seventh person voted out is Bradley.