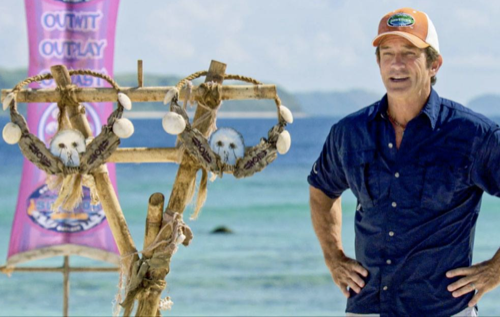 Tonight on CBS Survivor: Ghost Island airs with an all-new Wednesday, May 2, 2018, Season 36 Episode 11 and we have your Survivor recap below. On tonight’s Survivor season, 36 episode 11 called “The Finish Line Is in Sight,” as per the CBS synopsis, “Two people will be voted out in a surprise twist. Also, one player works hard to deceive his tribemates into thinking he has an idol.”

Domenick was surprised at the last Tribal Council, it was a huge challenge to know who was telling the truth and who was lying. Meanwhile, for the first time in the game, Laurel feels great and now has protection because she saved a lot of people. But even though Kellyn was saved, she is not sure if she wants to trust Laurel in this game. Domenick heads out to look for an idol – he finds a coconut with an emblem on it and feels like he struck gold. Domenick did find something that holds power but it may not be the power he was looking for. This is David’s authentic fake idol that he used to fool Jay in Survivor’s 33rd season, Millennials vs. Gen-X. Having made it to the final six, Jay did the same thing Domenick just did, he picked up a coconut and found David’s fake idol. Believing it to be real, Jay let his guard down, it was a costly mistake and he was voted out that night. This tainted idol has not matured into a real idol, so because it has no power, there is no way to reverse the curse. Instead, his opportunity to gain power lies in his ability to fool another player, the question is, is he clever enough to pull it off.

Kellyn is the first one out, then Michael, then Donathan, then Laurel, then Sebastian, then Jenna. We are down to two on each tribe. Angela is out, Chelsea wins individual immunity but her tribe goes to tribal council first. It is down to Domenick and Wendell, they are both stubborn. Wendell drops out, Domenick wins individual immunity and his tribe goes to council last.

Michael asks Donathan if he can borrow his idol to show around so people think he has one, Donathan says no, he doesn’t want to be targeted for being deceitful. Michael then goes to Kellyn and lies to her by saying that he does have an idol and he is going to play it at Tribal Council. Kellyn then goes to Domenick and he says that Michael is lying. Domenick wants to get rid of Michael and will reassure anyone that Michael does not have an idol. Kellyn then goes and talks to Wendell and tells him the same story, she says she believes Michael. On the other hand, Laurel is frustrated, she doesn’t know if she should believe that Michael has an idol.

Kellyn is going to play her extra vote to put two votes on Laurel, just in case Michael does have an idol. Donathan is very worried, it sounds like maybe Laurel can go home and she is his strongest ally in the game.

Time for the first Tribal Council. Sebastian says Malolo is getting the short end of the stick. Jenna says there are no cracks and she knows she is going home and she is ready. Donathan thinks there are tricks up people’s sleeves and who knows, maybe he is going home. Time to vote. Donathan plays his idol for himself and you can see that Jenna is disappointed. One vote Sebastian, One vote Donathan and three votes for Jenna. Jenna is going home.

Time for the next Tribal Council. Wendell says it is either Michael or Laurel is going home. Kellyn says it is not that easy, but she is very very scared. Meanwhile, Laurel thinks it is her. Two votes Laurel, two votes Michael, one vote Wendell and one vote Kellyn. It’s a tie. Time to vote again, for the person they want to go home and it is Michael.