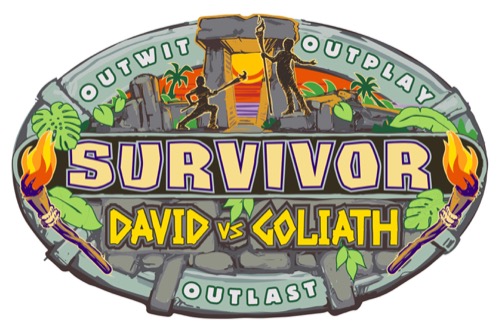 Tonight on CBS Survivor: David VS Goliath airs with an all-new Wednesday, September 25, 2018, Season 37 Episode 1 premiere  and we have your Survivor recap below. On tonight’s Survivor season, 37 episode 1 called “Appearances Are Deceiving,” as per the CBS synopsis, “The Season 37 premiere: A vicious cyclone stirs up emotions on the first day on the island, and the “David” tribe tries to take down the “Goliath” tribe”

Survivor is back with a modern take on one of the most intriguing matchups of all time, this is Survivor, David vs. Goliath. On the David tribe, there are ten strangers that share one thing in common, overcoming obstacles. They have spent their lives battling adversity and are always the underdog. Christian is a huge nerd, Elizabeth was homeschooled with her seven siblings. They take on the Goliath tribe who share one thing in common, winning. They have spent their lives capitalizing on their assets and are also considered the favorite. Natalie is a proven leader and literally has people who would take a bullet for her. Angelina has led a fairytale life, she got her MBA at Yale, she has so much that puts her in an advantageous position. Pat is a firm believer that you don’t judge a book by its cover. For the next 39 days, the survivors will be abandoned in the islands of Fiji.

The survivors gather with Jeff and he gives them a rundown on the game, releases the banner and hands out the buffs. Jeff starts with giving a task, the Goliath tribe must pick two people who they perceive to be the weakest members of the Goliath tribe; they pick Christian and Lyrsa. Now, the Goliath tribe must pick two of their own players who are the strongest, they choose Allison and John. Part two of the experiment, the David’s have to put Allison and John on the path that is the most difficult to complete and put themselves on the easiest. The first stage is a balance, they have a choice of a beam over water, a plank bridge and a two-person track. The next stage is agility, they have a choice between a net tube, the rope tunnel, and the crawl up. The third stage they have a choice of a 15 piece cube puzzle, an eight-piece slide puzzle or transferring 30 sandbags from one platform to the other. When they reach the out, one person will release a shelter making kit. The first person to release it gets it for their tribe.

Lyrsa says that they choose for the Goliath tribe to do the plank bridge, the net tube, and the cube puzzle. For themselves, the Davids have chosen the beam over the water, then crawl under and the eight-piece slide puzzle. It’s time for the first reward challenge.

Survivors are ready, and out of nowhere, the Davids are in the lead and Lyrsa releases the shelter. That was a blowout! Not the outcome the Goliath tribe was looking for. The two tribes head on their individual rafts and head to the island.

One of the Goliath tribe, Dan and Kara are already making a connection, looks like it might be the first potential showmance this season. Dan thinks he is so screwed, he calls Kara his kryptonite, his dog is also named Kara. The tribe starts to work on their shelter, Nathalie is already finding she has to make adjustments, she is 57 and the rest are 25ish. She has young people who work for her, she is accustomed to being in charge. Natalia is an Industrial Engineer and cannot get a word in because Nathalie is barking orders, she is putting a target on her back.

On the David tribe, the first thing they do is work on making a shelter. Pat start taking control of the building process as he is a contractor in his life back home. Christian thinks Pat can be a directive at times at what he wants people to do and in fact, he doesn’t think he has had his name shouted the way Pat does. Christian thinks Pat may have his days numbered because of his jokes, which are not always funny. At the end of the day, they have a good foundation for a shelter. Jessica is 19 years old, she is telling everyone she is 22 so her age is not a factor and she is already making alliances with everyone; maybe a few too many.

The David tribe is on Survivor to play the game, everyone is walking around and making alliances right from the start. Christian and Gabby are kindred spirits and both nerds, they make an immediate connection.

On the Goliath tribe, John is showing off about his being a wrestler, although he knows none of his characters are going to win Survivor. Nathalie is not helping with anything, just stands around and barks orders, a huge target is already on her back. Mike heads out to start looking for an immunity idol while everyone else is concentrating on their social game. Nathalie goes out to look for Mike. While Nathalie is gone, the rest of the tribe start talking about voting her out first, but there are mixed vibes because Mike walked away on his own. Nathalie finds Mike and she tells him that he has a target on his back because he was gone too long.

The first night was hard on the survivors because of the rain.

It finally stops raining, Nick creates his own alliance and calls it Thoroughbreds. Pat is still over the top, but he has been a lot of help building the shelter. Nick on the other hand has barely helped and put a target on his back because of his laziness.

Angelia thinks women don’t tend to find too many immunity idols and she wants to find one, so she wants to boost the stats up and find one.

Mike knows everyone is looking for an immunity idol, he just happened to get caught at doing it early in the game. John has already found an idol, and finding it is a Goliath moment for him.

Davie catches an octopus and everyone is excited. Davie calls himself a blerd, which is a black nerd and has always like zombies and cartoons.

On the David tribe, Bi shares that she was in an abusive relationship for five years. Nick doesn’t feel comfortable with everyone sharing their personal stories at first, but then he opens up. He tells everyone that he lost his mom to overdosing on drugs and starts crying. Nick feels weight off him after talking about it.

Its Day 3 and it is raining very hard when the survivors arrive at the first Immunity Challenge. Jeff shows them the immunity idol and tells them if they don’t have it, they are heading to tribal council and one person will be voted out. For this challenge, they are going to sprint through an obstacle to a sand pit where one person from each tribe will race to dig under a log, the first through will grab a machete and chop a rope to release a ladder. The second tribe will be penalized and have to untie knots to release their ladder. Then they will confront the Survivor pole vault which they must use to cross one very high platform to another, making their way to finish to solve a giant number puzzle. In addition, they are playing for reward, flint.

Goliath win the first Immunity Challenge sending David to Tribal Council. Pat tells Jeff it is a sickening feeling to see Goliath win, but they are going to stay strong.

When the David tribe leave the challenge, they go on a boat and it slams into one of the waves and they hear a crack and Pat is injured. A rescue team tends to him, Jeff arrives and finds out that there was a huge impact to Pat’s back, he is barely conscious and the medics don’t think he should continue in the game while Pat says he doesn’t want to leave. Jeff tells Pat that they have to take care of him and he leaves by helicopter. The doctors pull him from the game for his own safety. The rest of the tribe say their goodbyes. Gabby feels a sense of guilt, she feels like she misjudged Pat. Jeff tells the tribe there will be no Tribal Council, but there will be flint at their camp when they get there.