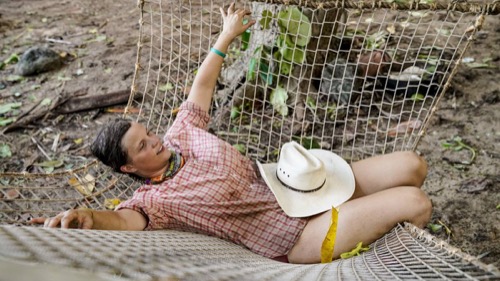 Tonight on CBS Survivor: David VS Goliath airs with an all-new Wednesday, October 24, 2018, Season 37 Episode 5 and we have your Survivor recap below. On tonight’s Survivor season, 37 episode 5 called “Jackets and Eggs,” as per the CBS synopsis, “Another castaway is voted out of the game.”

Kara feels exposed after leaving tribal council since she was blindsided. Now Kara has to figure out how to get in the good graces with the Davids since Alec pulled his big move. Over at Tiva, a storm is brewing. The winds are fierce and everything is getting pelted with sand. A river of water is running under their shelter. At Vuku, there is tree mail, there is cyclone coming so for safety, they are going to evacuate and will return to the game as soon as the storm stops. Dave is ready to go, he doesn’t want to be there in the storm.

They finally return to their camps, at Jabeni everything is literally destroyed and everyone is happy they were not there. At Vuku their shelter is barely standing, everyone’s mood is down because it is a pretty intense scene of destruction. At Tiva, they are already trying to repair their shelter.

Time for the reward challenge. Its been a busy couple of days with turbulent weather, but everyone is safe and sound and the game is back on. For today’s challenge they are going to use poles to knock sandbags out of an overhead net, once they have all their sandbags, they will use a giant slingshot to hit two targets. First two tribes to hit the targets, wins reward. After 14 tough days, chickens and a rooster to the first team that wins and the second will receive a dozen eggs.

Kara is scrambling to make a new alliance with the Davids, she is turning on her social charm. Meanwhile, the Davids don’t trust Kara.

Lyrsa is upset, she doesn’t like how Natalie wants to boil all the eggs in one day and eat them right away. Mike is looking forward to having a little Survivor without Natalie.

Dan, John, and Christian have their little group, Gabby is not part of it and Dan wants to make sure she doesn’t have an idol so they can vote her out. Dan goes out to look for an idol. Dan finds a clue to a hidden immunity idol, this gives him another chance. It is beyond important for Dan not to be caught when he goes to look for his idol.

It is time for the Immunity Challenge. For today’s challenge they are going to race up and over an obstacle, they will then climb a ladder, then use a rope to raise a bridge, cross the bridge, make their way to the finish line where they will retrieve a ball. Finally, they will maneuver that ball to the top of a snake maze. First two tribes to finish win immunity.

Vuku wins immunity, its a close finish for second, Tiva wins sending Jabenki to Tribal Council for the first time, someone is going to be the 6th person voted out.

Nick is unhappy, he feels like Natalie is bullying him into leaving his jacket and stealing Lyrsa’s jacket for her. Nick is just hoping that there are four votes to get rid of Natalie at Tribal Council. Mike agrees on getting Natalie to go, he just hopes he can get the Goliaths on board.

Time for Tribal Council, the topic of Natalie comes up and everyone has negative things to say about her. Nick says that Natalie only wanted jackets, she doesn’t care about anyone. In fact, Natalie said that she would vote out Lyrsa if she got a jacket. Angelina defends Natalie and says she wanted the jacket for her. Jeff says that he thinks he finally figured out Natalie, she has to get the last word. Time to vote, three votes for Natalie, two votes for Lyrsa. Natalie is voted out.

Angelina asks Natalie three times if she can have her jacket before she leaves and Natalie won’t answer her.