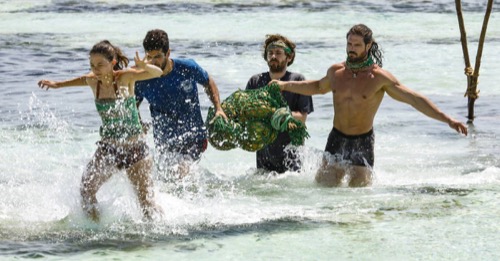 Tonight on CBS Survivor: David VS Goliath airs with an all-new Wednesday, October 31, 2018, Season 37 Episode 6 and we have your Survivor recap below. On tonight’s Survivor season, 37 episode 6 called “Aren’t Brochachos Just Adorable?,” as per the CBS synopsis, “Tribes battle to win a food reward for much needed nourishment. Also, the bond between the “Brochachos” becomes a personal achievement for one castaway”

Angelia is thrilled that Natalie went home, now there is peace at camp. Nick loved how Angelina looked like a fool with Natalie, who didn’t give up her jacket. Over at Tiva, even though they have the fishing equipment, nothing is getting catch.

Time for the Reward Challenge, one person will be tied to a bag of coconuts, on Jeff’s go they will work together to get that bag to the beach. They will then lift that bag to allow that person to climb over an obstacle and collect four rings in an attempt to land those four rings on a target. The first tribe to finish will get cooking utensils, spices and 10 vegetable kabobs. Second tribe to finish, 2 kabobs. Jabeni is a disaster, the look like a tribe that never watched Survivor before. Tiva is in the lead. Vuku climbs up, but then falls behind and Tiva wins the first reward. Jabeni wins the second reward.

Christian is having a blast being a part of the Brochachos, he is becoming a Goliath figure in his tribe. Gabby is worried, because the guys are banding together and she is on the bottom. She hopes she stays in the game, but the game is not about hope, so she tries to align herself with Alison. The question is, does Alison align with herself to break up the boys club, or remain loyal to them.

Elizabeth is still having a hard time with the pain in her back from sleeping on the bamboo so she decides to do something about it but doesn’t have everyone’s help or agreement that she should change the bamboo bed. Elizabeth reveals that she had back pain before she came to Survivor and all she wants is it to make it better for everyone. Kara likes the conflict in the tribe over the bamboo bed, it just helps her game. Carl is having a hard time with Elizabeth, he finds her a know it all, and he doesn’t like people like that.

Time for the Immunity Challenge. They have to carry a large saucer to a water tower, fill it, make their way through a series of obstacles, empty whats left into a well and race back. Once they have filled the well with water they will drop a bag of puzzle pieces. They need to use the pieces to solve a puzzle. The first two tribes to finish will be safe. The losing tribe will go to tribal council.

Jabeni is in last place, they are having trouble filling their well, looks like they might give up. Tiva is closing in on another immunity win, and they did it. Vuku looks like they are going to come in second, Jabeni is not giving up, their heart is in it, but they drop and have to do it over again. In the meantime, the challenge is over, Vuku comes in second.

At Jabeni everyone is talking and trying to figure out who to vote out. Lyrsa is surprised that Angelina thinks she would work with her after the whole jacket thing. Angelina was open to working with Lyrsa, but she feels there is no negotiating with her and wants to put the nail in her coffin at tribal council.

Looks like it is going to be Angelina who is voted out.

At Tribal Council Lyrsa says that trust is important to her in the game. Angelina says that what is important to her is trust, loyalty and strategy. Angelia says that they are the underdogs and she hopes everyone sticks to the plan tonight, like they did when they voted out Natalie. Nick says they all have a plan, but Lyrsa says that everyone has a plan, the question is, are all the plans the same. Angela says nice things about Nick and Lyrsa says she is just trying to buy his vote. Mike says that if they get it wrong tonight, he hopes it is not a fatal mistake. Time to vote, Jeff reads the votes: First vote Lyrsa, then Angelina, another for Lyrsa. Lyrsa is voted out. Mike doesn’t look happy about the decision.