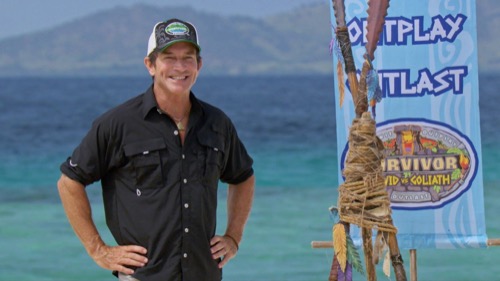 Tonight on CBS Survivor: David VS Goliath airs with an all-new Wednesday, November 28, 2018, Season 37 Episode 10 & 11 and we have your Survivor recap below. On tonight’s Survivor season, 37 episode 10 & 11 called “Tribal Lines Are Blurred, Parts 1 & 2,” as per the CBS synopsis, “Letters from home could fuel castaways’ lives in the game. Also, one castaway’s negotiation skills for a bigger food supply could pay off.

The Kalokalo Tribe were patting themselves on the back on tonight’s all-new episode of “Survivor: David vs. Goliath”.

The tribe managed to weaponize their advantages so perfectly that they eliminated Dan last week. They suspected he would use an idol and therefore nullified it before it saves him. It had been masterfully played and got some of the others think. Angelina for one was reconsidering her alliances. She had created an alliance with the old Goliath Tribe and in the beginning, she was someone they listened to however that all changed after the last elimination because she saw for herself how willing they all were to turn on her. Angelina said that the Goliath tribe was dead to her after that and that she would work to undermine them in any way she could. And so she was already lining up people she wanted to eliminate and this was before their next challenge.

Angelina even met with Christian who was one of the Davids and she made it known that the Goliaths could no longer count on her through what she didn’t say was that she was even fully loyal to the Davids. She said in her confessional that no one tribe matters anymore and so again her alliances weren’t going to mean a thing once she was finished getting her revenge. Only Christian and Gabby became the hot tickets after the last elimination. They were seen as people with real power and so the whole Purple vs Orange didn’t mean much when they got shuffled around for their next challenge. The next challenge carried a reward and so it required everything imaginable.

The tribes had to walk rope bridge, swim, and show off perfect aim. The tribe that won that one wore Orange, but each member of that tribe did their best to pander to Christian and Gabby. The two had once again landed on a winning team and so it didn’t matter if Alec was the one that won for them because he was the same guy that suddenly wanted to be their friend. He did his best to flirt with them and paint himself as the loyal friend that would never think about turning on them. Meanwhile, no one remembered not to overeat and so it wasn’t surprising when the majority of them became sick afterward. Alec was part of the overindulgence crew and he had to stop playing the game long enough to go throw up behind a bush.

The other tribe, unfortunately, couldn’t find any berries or fish to eat and so they had the opposite problem. They were so starving that they had been woozy and going into the Immunity Challenge and that challenge had seemed simple enough. The tribes all had to stand on a plank/crucifixion board and somehow be the last one standing. People dropped left, right, and center because they knew that they could eat if they did. So the starving tribe didn’t last long. It all came down to Alec and Christian. Christian was considered the weaker one because physically he wasn’t as top notch as say Alec was and what they didn’t know was that Christian was good at mind games. He began a story that lasted for hours and practically lulled Alec to sleep.

Alec’s stomach was still bothering him and so having Christian’s nonstop voice in his ear didn’t help. It instead led to Alec stepping off the board and handing over to Christian. Christian was the last one standing and he won immunity. He was still loyal to his core group in the end and so he was willing to vote with them. Carl was part of that alliance and he wanted to vote out Alec. Alec was winning all the challenges and he was a serious threat in this game. The others agreed that Alec could be voted out and everyone had been in an agreement until Carl got into an argument with Gabby. Gabby had wanted to discuss where everyone was voting and Carl had just done that – so he thought Gabby was wasting her time and told her so. She, in turn, got upset and started crying.

Gabby could be quite sensitive. She cried because she felt like Carl took over their alliance and she later told Christian how she felt, which then put Christian in an awkward position. He knew that the time would come where he would have to decide between Carl and Gabby and he wanted to pick Gabby. Gabby had been by Christian’s side for the longest and so he thought about eliminating Carl. He approached Alec and he told him what he was thinking. He said Carl might become a reliability and so Alec tried to foster that. He knew he was on the chopping block and he tried to get Christian to form a new alliance with him. And ultimately Christian kept what he was about to do to himself which met Alec was eliminated at tribal.

Christian could have talked up Alec’s good points with the others to get them to keep him and he didn’t because he wasn’t sure he wanted to give up his newfound power with the Davids.

The second half hour of tonight’s all-new episode picked up right where the last one left off. The Davids changed the dynamic of power and they quite smartly playing a game where it didn’t matter what tribe they were reassigned to. They were still loyal to each other and so now everything was about color. The Purple vs. Orange had an uneven number left and so the tribes got to pick their teams. The only one that was left out was Christian. He had to sit off to the side during the next challenge. The challenge itself on the other was playing a game of hoops. The tribes all had to get a ball into the net as they were jumping into the water and so the breakout star with this challenge was Carl.

Carl won his first Reward Challenge and got to cruise on a boat with some beer. With his win, the only one that hasn’t won a challenge is Angeline. She had even missed all of her shots and so she had been stuck back on land through the ones that left drank a little too much. Carl had gotten so drunk that he told a Goliath that the next person that needed to vote out was Alison. Alison was another Goliath and so no one would jeopardize their own alliance like that. It had been foolish of Carl and he got sloppier as he continued to drink. He went on to tell everyone about how they were going to get rid of Alison and she wasn’t important because the only one that would be upset was Gabby. And it turns out Gabby was playing her own game.

Gabby and Christian decided to get rid of Carl. Carl was the one that everyone believed was the Godfather of their alliance and the two of them wanted to be view as the most important. They thought that Carl was drunk with power and they were right because Carl started beckoning people over to him. He would demand that the other Davids come to him and do as he said. He even tried to order Christian around and so that had been the final insult. Christian began talking to the others about getting rid of Carl and everyone had seen the way Carl acted. They didn’t serve Carl and they wanted to make that known. And so Gabby and Christian got their numbers together by that first night while Carl was still drunk.

The tribes also figured out something else. They realized that they needed more supplies like rice and so they wanted to make an agreement. They wanted to trade most of what they did have for more rice and the one they elected to act as their negotiator was Angelina. She made a great case for all of them and she got more rice on the table, but in exchange for that rice, someone had to give up their turn on the Immunity Challenge and so Angelina took one for the team. She gave up on a chance for immunity because the rice was more important and it showed the others that she was willing to do anything for the sake of all of them. And so she sat down while the rest of them ran the latest challenge.

To win the challenge the contestant had to make through the course and spell a thirteen-letter word at the end. The word was what stumped them all because no one could spell it until Alison began to figure out and then Davie figured out from her. He managed to beat her in actually spelling it and so he won the challenge. He was safe and Alison thought she was in danger. The others that thought they were voting out Alison figured that the situation worked out perfectly for them and so Christian and Gabby hadn’t gotten around to filling in everyone. They hadn’t told Angelina what they were going to do and so she still thought the plan was Alison when instead had been changed to Carl.

Christian and Gabby hadn’t wanted to tip their hands. They told only the majority they needed to vote out Carl and that way their real plan never got around to Carl.

Later at trial, the past few that were eliminated came back to see who would be eliminated tonight and they had all been shocked when the person that was sent home was Carl.