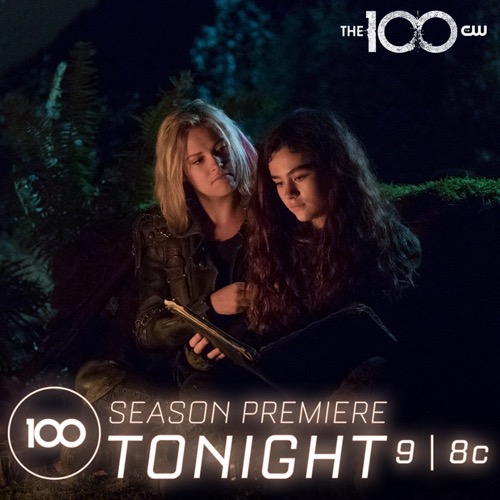 Tonight the CW series The 100 airs with a Tuesday, April 24, 2018 season 5 episode 1 and we have your The 100 recap below. On tonight’s episode called, “Eden” as per the CW synopsis, “In the season premiere, Clarke struggles to survive on a desolate, scorched earth. Meanwhile, her friends in space come across a long-awaited beacon of hope.”

Clarke pulls herself out of a pile of rubble. She is in the middle of nowhere. She walks awhile. She stops to dig for something. She finds her guns, gets in the truck and takes off. She makes it to her destination. There is wreckage everywhere, for miles.

She uses a long pipe to move some of the rocks that have collapsed to make her way to the location. She stops to eat and then returns to shoveling and pulling apart the rubble. Rocks collapse around her. She rolls out of the way. She gives up on trying to get into the bunker. She has been alone for two months. At night, she sleeps in her truck wondering how she is going to make it 5 years. She finds a letter in the truck and begins to cry.

The next day, she talks into the hand radio. She hasn’t had water in 2 days. She wants the person, who is hopefully listening, that they shouldn’t feel bad about leaving her here. She gets in the truck and drives. She makes her way to the top of a mountain. Night falls. She hears raindrops. She gets out of the truck and collects water while drinking what she can get. Daylight comes. She stops to eat bugs off the grill of the truck. A strong wind comes. She tries to get out of the truck and take the solar panels off to bring inside but loses one in the wind. After the storm, she can’t start the truck. Some of the panels on the side are damaged. She gets her things and starts walking. She travels miles in the hot sun. When the sun starts to drop she does too on the ground. She wakes sunburnt to a bird picking at her. She chases the bird up a sand hill but roles back down. She gets so mad she begins to scream into the atmosphere. She has nothing left. She is done. She takes her gun out and points it at her temple. The bird flies overhead. She runs up a hill and peers over. There is lush green on the other side. She thanks the gods and shoots the bird.

Clarke drags herself back to one of the homes. She works to sew up her wound, fighting through the pain. She wakes later to see the child peering through the window. She grabs a weapon.

The next day, she walks to the creek and sees the child fishing. She tries to talk to her but the kid runs. Clarke cleans her leg in the water. The child watches her from up in the bushes. Clarke gets up to leave and leaves a drawing behind. The girl runs down the hill to get it. She smiles when she looks at a drawing of what looks like her.

Clarke has just got a fish and has returned home. The young child, named Madi, is now a teen girl. She comes into the drive and parks the truck. Together, they head out and build a fire. They sit and stare at the night’s stars talking about how they met.

Raven, Emori and the others all sit to eat soup. None of them like it. They are still on the ship and talk about what they need to do to get to the ground. Suddenly, they spot a ship.

Clarke spots a prisoner transport ship. It starts to land in front of her in the distance. She yells to Madi to get the guns.

Clarke and Madi are driving in the truck. Madi is scared. She wants to know who they are. Clarke stops the truck and tells her to go hide in her secret spot. She gives her a gun.

Clarke hides in the woods and watches as people get off the ship. They talk to one another about sweeping the village door to door. Clarke hears Madi’s gun fire. Clarke comes out of nowhere and starts fighting them. Madi shoots and hits one of them. Clarke shoots the other.

Monty is afraid to dock. What if they can’t return to the place they have been safe for the last 6 years. They are all nervous about being on the ground. Bellamy thinks they will be fine now that they are all family now.