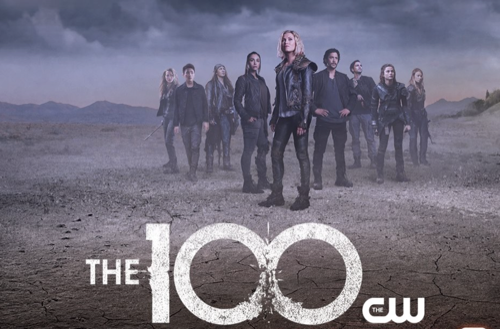 Tonight the CW series The 100 airs with a Tuesday, May 8, 2018 season 5 episode 3 and we have your The 100 recap below. On tonight’s episode called, “Bellamy leads the charge investigating a potential way home. Meanwhile, Clarke and Madi deal with the new, uncertain threat to their home.”

The strangers from the ship hear screaming. They run. It is one of their own. Clarke fires from a distance. She takes out one of them. The others know she is on the ridgeline. They fire back. Madi and Clarke’s ears ring. They get up and run.

The female leader Charmaine shoots her own. There is no saving him.

Raven and the others watch a mining ship in the distance. It looks like one of their engines has been destroyed. They decide they are going to try and dock. They are coming in to fast. Emori and Raven try to regain control. They all get off the ship. Harper and Emori stay back to check for damage. They see signs for inmates. They get nervous. An alarm continues to go off. They shut it off and start looking for hydrozene. They hear radios and voices. It is the people who were on the ship.

Clarke hides Madi. The others listen as the group chases after Clarke. They catch Clarke. They hit her as they try and get her to answer who she is with. She won’t answer. The female leader has to break apart two of her men. One wants to talk to Clarke and the other wants to kill her. She killed 4 of their own.

Charmaine and her partner Shaw have Clarke tied to a chair. They question her. She won’t speak. The leader radios to her people to shoot to kill.

Monty comes across a large room of pods on the ship. The others are creeped out and urge him to keep moving.

Raven and the others access the captain log. There hasn’t been a login 100 years. A video shows prisoners taking over and killing the crew. Charmaine is in the video. Someone comes up from behind. They all take turns fighting him. Echo comes running in and stabs him. Morgan chokes him. He won’t go down. He finally dies.

Murphy and Bellamy look over the ice pods that hold bodies. The debate of they should pull the plug on them all. Echo reminds them all that it took 3 of them to take out 1 of them. They talk about remotely rigging the pods so that they can threaten who over is on the ground. They put down their weapons or their people will be killed.

Night falls. Shaw offers Clarke a drink. He asks her to tell him her name. She won’t talk. He tells her how he grew up in Detroit. The radio sounds off. Someone ran out of a cave. A fast little one. Clarke realizes that it is Madi. Charmaine tells her men to shoot. Clarke knows where Madi is leading her men, into a trap. If they stop, Clarke will tell them everything. Charmaine agrees. She sits in front of Clarke and asks her to tell her how the world ended.

Raven is sitting by herself. She tells Bellamy that someone has to stay on the ship with eyes on the ground in order to threaten them with the pods. She has to be the one who stays. Besides there is an escape pod, she tells him. Bellamy tells her there is no way. He is hesitant but admits she has to do it too. The others come in. Bellamy tells them Raven is staying. They resistant but agree too. Murphy tells them he is staying behind too.

Raven tells Murphy there is no escape pod. Meanwhile, the others land on the ground alive. They all decide they need to get out and take cover in the trees. It is dark. They walk a bit. Charmaine’s group finds them. They report back to her. She is mad at Clarke for lying.

Bellamy and the others take out the men. Madi comes out of the woods. She recognizes Bellamy. She tells them Clarke is alive. They have to go.

The group watches as one man has an electric collar around Clarke’s neck. He hits the button. Shaw tells Charmaine that she has had enough. The rover pulls up. Bellamy gets out. Clarke sees him as she lays on the ground. She smiles. He tells Charmaine they need to make a deal or he will remotely kill 283 of her people.