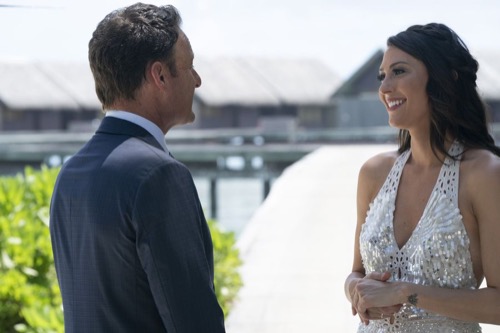 The Bachelorette 2018 airs on ABC this evening with an all-new Monday, August 6, 2018, season 14 episode 10 finale and we have your weekly The Bachelorette recap below. On tonight’s season, 14 episode 10 finale as per the ABC synopsis, “In the season finale, Becca heads to the Maldives with her final two bachelors: Blake and Garrett. She can envision a future with both men, but time is running out. Then later, Becca will be in the studio with Blake and Garrett to discuss the outcome and decisions that changed all of their lives forever.”

Becca is in the Maldives in Thailand. Her relationship with Blake came on fast but Garrett has been a little slower, although Becca admits she is in love with both. The men now will have an opportunity to meet Becca’s family, they know her best, and she is excited to have their opinions. Becca tells her family that she has two of the guys in the world, she loves them but hasn’t told them. She reveals that Garett was married before and that was a concern, but she is no longer worried about it.

Garrett arrives at the villa to meet Becca’s family, he was looking forward to this. He talks about his hometown date and how Becca got to meet his family – he says that he is in love with her.

Becca’s mom says that her dad would have loved to hear about Garrett’s love for her, but her skepticism is that they have traveled down this road before with Arie.

Garrett has a heart to heart with Becca’s Uncle and they get really deep and both shed tears.

Garrett then spends time with Becca’s sister, Emily, and he tells her that when he loves someone he will go to the end of the world for them, he gets emotional again – he says he will take care of her, protect her and make her feel safe. Emily then shares her chat with Becca and tells her she felt like she has known him for years, she also mentioned that he was crying and, she thinks he is fabulous.

It’s Blake’s turn to meet Becca’s family. Blake tells them that he is nervous but excited – he admits that it has been hard and reveals when he first told her that he loved her.

Emily sits down with Blake, he tells her that he gravitates towards strong women and both he and Becca work well as a team. He says that last week things hit home when he realized that she also has a strong connection with another man. Emily finds it is really tough because both men are amazing, yet very different. Becca admits for the longest time she thought it would be Blake, but then Garret came around and changed everything.

Blake sits with Becca’s mom, he says that week after week Becca became more special to him.

After speaking to Blake’s family, he is worried because they spoke about Garrett and they also mentioned if he ever thought about what would happen if he doesn’t get the final rose.

When Blake and Becca went to leave, he felt something was off with her and he is worried.

Becca is alone with her family, they all agree that they are two great guys. Her mom says that Blake was really like a team partner with Becca, yet Garrett has a really beautiful soul and ready to be something special, yet more of a risk. They all agree they are glad they are not Becca because it is a tough decision.

Its Becca’s final date with Garrett. The two head on a boat and there is a lot of fireworks. Becca reveals that she loves that their relationship has evolved slowly and not overnight. Becca tells Garrett a little about what her family thought of him. Garrett is very confident, he can’t wait to propose to Becca. The two jump in the water and go swimming.

It’s evening, Garrett and Becca agree that the day was very magical. Garrett talks about a future with Becca and she says that she thinks about the same thing. Becca asks him if there is anything he wants to ask her while he has the chance – he says no, he is confident and knows that she is the person that he wants in her life and hopes that she feels the same. But, if she doesn’t choose him, he just wants her to be happy. Becca tells him that what first attracted her to him was that he reminded her of her dad who passed away.

Time for Becca’s last date with Blake, they get on some bicycles and drive around and enjoy the beautiful countryside. The two then head in the water and go surfboarding and swimming. Becca tells Garrett that her parents loved him and all she wanted was her family’s support in this. Garrett tells her that he felt she was off the other day but she assures him everything is ok. Garrett doesn’t think that anyone can make her smile or laugh like he can. Becca feels that is uncanny the way the two of them are the same. It is evening time, the two head to Blake’s room and talks and toasts an amazing day together. Blake made her something, a box filled with some of their favorite moments. Becca feels so good with Blake, there was an instant connection that grew and was very strong.

Its decision day and Becca starts by reading a heartfelt letter that her sister wrote to her wishing her luck.

Garrett is in a good mood, he is excited and positive. Garrett meets with Neil Lane and chooses an engagement ring for Becca. Blake is anxious, he is nervous but has this strange calm that everything is alright. Blake is next to meet Neil and also chooses a ring for Becca.

Becca feels like she could be happy with either Blake or Garrett, but she is choosing the man that she feels that she can’t live without.

Becca is feeling very anxious, she loves two men and she has to say goodbye to one of them.

The first man is Blake, he pledges his love to Becca and she tells him that he is not the best fit for her. Blake is devastated and tells her that he loves her, he walks away. Blake continues to cry and is clearly shattered, but says he sensed something was wrong.

We fast forward to the studio and Blake is with Chris, watching his departure from Becca for the first time. Blake says it is not easy, you are moments from getting down on one knee and then it is over – he was confused, frustrated; it is hard to be so sure of something yet so wrong. Chris asks Blake why he told Becca that he loved her after she dumped him, he says that he just wanted her to know. Blake admits that in the last couple of weeks he was worried about her connection with Garrett. Blake says that he will always have a love for Becca, but he truly hopes she found what makes her happy. Blake admits that he is nervous about seeing Becca again but he wants her to know that there are no hard feelings.

Becca joins Blake and Chris on stage. Blake tells her he watched the show back and he did get some answers, but wants to know if there was one thing that triggered her decision, she says no. He asks if there is something in their future that didn’t seem right, she says no, he was always so solid, it was just her trying to sift through their interactions and figuring out who would be the best match for her. Blake tells her that there are no hard feelings. Becca says that she was so torn up and anxious because she knows how it feels, she is sorry and knows that he will find someone that is a good match for him because he is an amazing person. Blake says that he feels fortunate to have met her and wishes her the very best. Blake says that his family and friends have gotten him through everything.

We go back to the Maldives, Garrett is walking towards Becca, he arrives and showers her with compliments then he tells her that he wants to spend the rest of his life with her. She tells him that he got the first impression rose because she felt something special in him, he reminds her of her dad. Becca tells Garrett that she loves him. Garrett gets down on one knee and asks her to marry him, she says yes and gives him the final rose, which he accepts.

Becca and Garrett join Chris on stage and the two are clearly very happy together. Garrett says that he didn’t know it was going to him at the end, but he loved her and if it was meant to be, it was going to happen. Garrett admits that when Becca said “but” in her final words to her on the last day, he was nervous. Garrett admits when Becca visited his family, he knew he was in love with her. Becca’s sister Emily says that she is so happy for her sister, it’s beyond wonderful and incredible. Becca says that her father was the most open and loving person, he got his faith in the outdoors and Garrett is the same.

Chris shows a video of Garret and Becca on little getaways during the last few months while the show was airing. Becca says that they have grown so solid. Garrett says that he got some press because of something on social media and just wants to say that he didn’t mean to offend anyone, he is very sorry and didn’t mean to hurt anybody’s feelings. Garrett and Becca are on the same page, they can’t change the past and can only learn from it and move on.

Chris surprises Becca and Garrett with an all-expenses trip to Thailand as an engagement gift. Chris has another gift, but its outside. Chris hugs and kisses them and tells them to go outside. It all started in a minivan, and it ends in one outside for the new duo.

Chris shows us footage of the new Bachelor in Paradise.