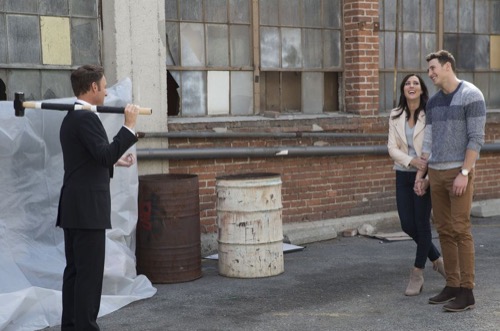 The Bachelorette 2018 airs on ABC this evening with an all-new Monday, June 4, 2018, season 14 episode 2 and we have your weekly The Bachelorette recap below. On tonight’s season 14 episode 2 as per the ABC synopsis, “Twenty-one men—still reeling from the dramatic first rose ceremony —look to get their love story with Becca off to a good start as they move into the mansion. Fan-favorite Bachelorette couple Rachel and Bryan put eight of the bachelors through their paces in an obstacle course meant to test their abilities as a groom. Blake gets the first one-on-one date of the season planned by Chris Harrison with an assist from celebrity rapper Lil Jon. Ten men show to play in a dodgeball tournament.”

Becca is officially dating again since Arie. She thinks she needs to chill out and ride the wave. At the mansion, all of the guys are happy about their accommodations. Chris congratulates all of them for making it through night one. Chris tells them that Becca is serious about finding the one. If she doesn’t feel a connection, she is going to cut the cord. Clay, Nick, David, Jean, John, Jordan, and Lincoln are all chosen to go on a first date at Saddle Rock Ranch.

She treats them to some pampering. They get in tuxes. She brings them to meet her friends Rachel and Bryan, a happily engaged couple. They are going to take part in an obstacle course that involves finding the ring. There are only 2. They get ready to begin. The seven line up with a 25-pound ball strapped to their leg. They run to a bucket of cold water and jump in. Lincoln is in the running. David catches up to him. They both try to eat a cake with no hands to find the ring. Lincoln finds it first and wins.

Becca takes them all back home. They sit around the fire and have a drink. Lincoln asks her to go off and spend some time alone. The guys get mad. The two laugh in another room and smile when Becca brings Lincoln a wedding photo of them. They kiss. Back at the mansion, Blake receives the first one on one date.

Becca spends some one on one time with some of the guys while the others get annoyed with Lincoln showing off his wedding photo. Sick of looking at it, Connor throws the photo into the pool. The other guys laugh. Lincoln is disgusted.

Becca spends some time with Jean. They kiss. He thinks it was an amazing kiss. She comes downstairs to see Lincoln who tells her about the photo. She goes to talk to Connor. She tells him she is going to take a pause from getting to know him. Connor is upset.

Becca comes in to see all of the guys and gives the first rose to Jean. Lincoln feels like Connor ruined his chances of getting the rose.

At the mansion, Lincoln cries to some of the guys about the picture. They later talk behind his back. He is the first crier. Meanwhile, Becca and Blake go on their first date. They arrive at a warehouse to see Chris holding a sledgehammer. He gives them jumpsuits, safety glasses, and their own sledgehammer. They dress up and enter the warehouse. Lil John is in there as well as objects that remind Becca of Arie; race cars, the couch he broke up with her on and more. Lil John raps and encourages them to smash everything. Becca is having fun. She smashes several TVs that are playing the moment Arie proposed to Becca.

After their day, Becca and Blake sit and talk. Blake tells her about a past hurt he experienced. Later, Blake shares that Becca is an amazing woman.

The doorbell rings. Garret, Ricky, John, Ryan, Alex, Chris, Trent, Leo, and Colton are going on the next date. Two of the bachelors are sour they didn’t get an invite.

Becca gives Blake a rose and a kiss. They talk about how they both had a great day. Blake thinks this is the beginning of their love story. Becca thinks he has potential to be the one.

The guys get on the bus for their group date. They arrive to see Becca in a field outside of a school. She brings them into a gym. They get pelted with dodgeballs by a group of kids. They run suicides before they are forced to catch balls at the speed of 50 mph and then 100 mph. Christon hits Becca with a dodgeball. They head over to play in a dodgeball championship. Half of them wear line green, the other half neon pink. In the arena, things get rough. Becca is impressed by Leo. The green team wins. They head to the after party.

Back at the house, Becca talks to all the guys. She had a lot of fun today. She spends some alone time with Garrett. He tells her he is excited to spend any time he can get with her.

Becca spends some time with Wills. They talk and kiss. He wants the rose bad.

Colton needs to talk to Becca. He had a relationship with Tia from last season. He hopes she will be all right with it.

Colton and Becca spend some alone time. He tells her about Tia. She feels like she has been put in a strange position. She needs some time to think. She is disappointed. It is rose giving time. Becca gives the rose to Wills. Later, Becca cries. She fears some of them may not be genuine.

Everyone goes to the cocktail party. She spends some time here and there with the guys. Connor makes her laugh when he asks her to throw his photo in the pool. Jordon decides he is going to shake things up. He strips down to his underwear and takes a stroll downstairs. He interrupts Becca talking to David and pulls her away. The others are annoyed. He tells her he is more than a model.

David confronts Jordan. He thinks he is rude. He wants to know if there is more to him than being a model. They argue back and forth.

Becca asks Colton to come to have a chat with her about Tia. He tells her he is here to get to know her. She is attracted to him but she doesn’t know what to do.

It is time for the roses. Becca gives a rose to Chris R., Jason, John, Clay, Mike, Connor, Leo, David, Garret, Nick, Ryan, Jordan, Lincoln, and Colton. The others take a moment and say their goodbyes.