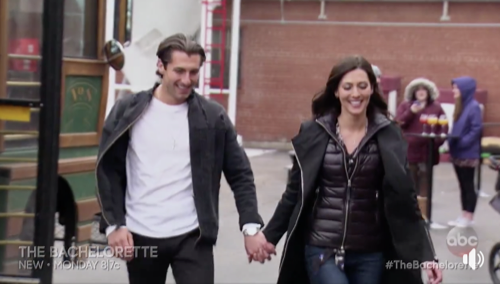 The Bachelorette 2018 airs on ABC this evening with an all-new Monday, July 2, 2018, season 14 episode 6 and we have your weekly The Bachelorette recap below. On tonight’s season 14 episode 5 as per the ABC synopsis, “Richmond is the backdrop for a defining week in Becca’s journey. Jason and Becca’s date takes the couple on a trolley tour around town. Seven men pay homage to the state, one of the cradles of democracy, as they take a history quiz and participate in the “Beccalection 2018” debate. Leo and Becca take an aerial tour of the state and shuck oysters. Australian country superstar Morgan Evans caps off the night with a special performance. One bachelor mounts a late-night surprise.”

Becca is in Virginia with the guys which is a completely different vibe from Vegas. Becca tells Chris that she is feeling so good with these guys and Chris is happy about the smile on her face.

The guys are settling in and the first date card arrives. This one is for Jason, “life is full of surprises.” Colton listens to Chris and Lincoln argue, he says it is like dumb and dumber and he doesn’t know which one is which. Jason gets up to get ready for his date, he doesn’t want to get involved in the argument and drama between Chris and Lincoln.

Jason and Becca start their date by having fun decorating donuts and throwing frosting in each other’s faces to a gothic party. Jason is a really good sport and even participates with one of the acts.

Back at the hotel, Colton thinks Chris is falling apart, he is a walking storm cloud. The guys collectively don’t think he is going to make it past this week.

Jason and Becca are on a bus and head to a bar and Becca surprised him by bringing a couple of his friends. Jason loves the surprise and thinks it is so meaningful. Jason tells his friends that everything he would want in a life partner is there. Meanwhile, Becca asks his friends questions to get to know Jason a little better.

The two go to dinner and Jason opens up about his life, they find they have a lot in common.

At the hotel, there is a date card; Colton, Garrett, Wills, Connor, Blake, Lincoln and Chris, “let’s make history.”

Becca tells Jason that she really believes that they needed this date, she tells him she had the best date with him and gives him a rose. Becca has one more surprise for Jason, they head to the top of the building and go on a balcony, Jason screams out that he got the rose and Becca silently admits she is falling for him.

Becca meets the guys for the next date, she is really excited and hopes she has a good day with them. Today is all about history, they have to campaign for the affections of Becca, in a debate for her hand.

Its time for the debate. Colton gets the first question and Becca loves his answer. All the other men go one after the other and things are going pretty well, but Lincoln takes a stab at Chris. Then, Chris makes a stab at Lincoln, says that he has a nasty side that is aggressive and if Becca saw it, she would be disgusted. Becca does not look happy.

Time for Becca to have a cocktail party with the guys, she tells them that she wants to put the day behind her and have a good evening. Lincoln is the first to spend time with Becca and he tells her that is afraid to be around Chris and he is embarrassed.

Chris walks in on Becca and Lincoln, he asks her how she feels. She says that Lincoln feels threatened with you and think he might get physical. Becca tells him that she is just trying to piece together what she heard about him and she doesn’t like that the guys are saying he is verbally abusive and they are threatened physically by him. Colton interrupts, Becca asks for five minutes by herself. Lincoln and Chris get into it, Colton walks in and says Becca is completely distracted by the drama and couldn’t even spend time with him.

There is a new date card, it is for Leo and reads, “the world is our oyster.”

Colton is with Becca and trying to cheer her up, then Connor tries to do the same thing.

It is time for Becca and Leo’s date, they get in a plane and fly over Richmond. Leo is interested to see how Becca feels about him, he has no idea at this point. Meanwhile, Becca feels that she is not the best her because of what happened the night before. Becca and Leo go oyster shucking and connect, Leo is pretty gleeful. Leo and Becca are at dinner, she admits that they have had a slow start and is she is looking forward to getting to know him better. Becca is happy he Leo is opening up to him over dinner. Becca gives a rose to Leo and he is happy that he opened up to her more than anyone else. Becca now takes Leo to a theater, they go inside and Morgan Evans begins singing. The two dance and kiss in front of the stage.

Leo returns to the hotel with his rose and he tells the guys that he had a wonderful evening. Chris gets up and leaves the room.

Chris heads to Becca’s room and she is very surprised to see him. The two head to the couch to sit and talk. He tells her that he is in to her and could really marry her at the end of this. Becca asks him what brought it on because that is a big change from the week before. Becca tells him that his drama has seeped into her dates and she doesn’t like it. Becca tells him that she doesn’t think they can go forward at this point because of all the things she heard. He says that he has been attacked and she reminds him that he has also done some of the attacking. Furthermore, she doesn’t feel the relationship will go anywhere and it is not fair to drag him through a rose ceremony. Becca asks if she can walk him out and he says he doesn’t need it.

Time for the cocktail party, the guys are thrilled that Chris is gone but many are still worried if they will be getting a rose. Becca knows what she wants to do, she wants to go straight to the rose ceremony and skip the cocktail. The guys are shocked.

Becca arrives in a beautiful gown, it will be interesting to see who she gives the roses to. The roses go to: Garrett, Blake and the final rose goes to Wills. Lincoln and Connor are going home.