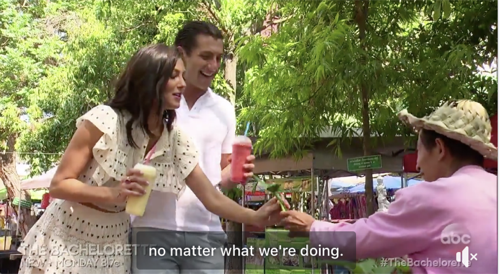 The Bachelorette 2018 airs on ABC this evening with an all-new Monday, July 23, 2018, season 14 episode 9 and we have your weekly The Bachelorette recap below. On tonight’s season 14 episode 9 as per the ABC synopsis, “Becca and her three suitors travel to the jungle paradise of Chiang Mai, Thailand, where the country’s tropical climate can only match the heat generated by her relationships with Blake, Garrett, and Jason. The romantic overnight dates will give Becca the opportunity to spend intimate time with each of the men away from the cameras. However, she still has concerns about each of these bachelors.”

This week Becca and the guys are in Thailand. She is in love with all 3 of them. She hopes to have a moment of clarity, so she can make a choice. She loves Liam. She is falling in love with Jason. With Blake, she feels like herself. It is effortless with him.

Blake is excited to go see Becca. They meet and kiss. They are going to go on a hike. After they pass a certain part of the land they cannot kiss or touch per traditions of the sacred grounds. They come to some temples where they meet monks. They sit and bow down. They are given advice for a successful relationship. You must trust, give love, have patience and accept one another. Becca and Blake leave and ring a bell 3 times to express love. Blake is nervous she may feel strongly for one or both of the other guys but he doesn’t express this to her. They head to dinner.

Blake and Becca sit down. Blake has a lot to talk about. Blake tells her that he fears heartbreak especially now that he feels stronger for her. He cannot ignore that she might feel for another guy like she feels for him. Becca can understand. She evades his question but thinks he has been so solid and consistent. She asks him if he is freaked out that they could potentially commit to one another. He tells her he is not. He looks for reasons to stay and not go. She hands him a letter from Chris and a key to the fantasy suite. They head to the suite. Becca is ready to spend the night with him.

They wake up together in the morning. Becca feels more in love with him. He doesn’t want her to go. Blake is scared more now to lose her after last night. He is trying not to stay in his head but he is probably going to be like this until she makes her choice. They kiss as she gets ready to leave. He gets choked up after she leaves.

Becca meets with Jason on a busy street. They kiss and say hi. They head to the Sunday Market to explore. They stop at a vendor and eat a dish made with crickets. Jason loves spending time with her. They walk out of a temple. She makes a comment about their future house and then gets upset. She immediately wants to take it back. She needs a minute alone. Jason sits off to the side while she talks to a producer on the show about how she feels weird.

Later that night Becca waits for Jason. She thinks they had a great date. Even if she felt weird and couldn’t picture a future with him. She wants to see if they can get it back on track. He feels strongly for her and his family approves. He asks her how she feels. She admits to feeling off earlier in the day. She gets choked up and goes to take a break. She steps away and cries. She feels bad but she can’t see a future with him.

She heads back to talk to Jason. She tells him she doesn’t feel confident about them. She sees a future more with the other guys than she does with him. He asks her if she wants to wait and spend more time together. She doesn’t. She cannot explain it but she doesn’t feel it with him. She offers to walk him out. They hug goodbye and he leaves. In the car, Jason is pretty shocked by her decision. Becca sobs.

The next day, Becca is still upset and crying that she sent Jason home. She thinks Garrett or Blake is a better fit for her. Later, she meets Garrett. They say hi and kiss. She has a fun day planned for them. They are going to go rafting on bamboo. Becca thought it was going to be quiet and romantic until they come up to see dozens of other rafts and people in the river. They stop and enjoy a drink while they toast one another. They talk. Becca feels better about sending Jason home.

They head to a nighttime picnic. They had a fun day. They toast again to each other. Garrett talks about his initial fear of being engaged and married again and it not working out. She asks him about how he sees their future. He is willing to move anywhere to let her follow her dreams because he has that flexibility with his job. His family loved her and he is in love with her. She kisses him and hands him a card to the fantasy suite.

They head off to their suite which is a treehouse. Becca thinks he would be a great family man. They wake up happy and eat breakfast together. He is so happy he told her he loves her. Becca feels the same but she hasn’t told him yet.

Becca loves them both. She needs a moment of clarity to decide. Jason shows up at her door. He thinks their night ended abruptly. He couldn’t leave without coming to see her. He tells her how much she means to him. She tells him he is an amazing man and it was a hard decision for her. He hands her a scrapbook. They kiss goodbye. She cries as she reads through the scrapbook of their memories they shared.

Blake arrives at the final rose ceremony. He feels good. He tells Chris he loves her. Garrett arrives. He tells Chris he told Becca he is in love with her. Becca arrives. She tells Chris she is in love with both of them. She goes to see the guys and explains that she let Jason go home. She calls Garrett up and gives him a rose. He accepts. She calls Blake up and gives him a rose. He accepts. All 3 of them toast to putting Becca’s family. They are headed to the Maldives.