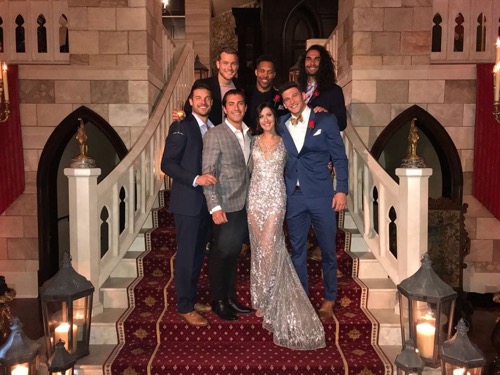 The Bachelorette 2018 airs on ABC this evening with an all-new Monday, July 9, 2018, season 14 episode 7 and we have your weekly The Bachelorette recap below. On tonight’s season 14 episode 7 as per the ABC synopsis, “Traveling to the tropical paradise of the Bahamas, Becca focuses on which four of the remaining six men should receive hometown dates.”

Becca and the guys are in the Bahamas. She is ready to get the dates started because she knows she is going to have fun. Becca sits with Chris to talk. She has never been here before. She is looking forward to no drama with the six guys left. She is falling for a couple of guys here. She is excited and nervous. She is just taking it day by day. She sees this ending with someone down on one knee and her saying yes. He wishes her luck.

Colton and the guys are sitting, talking about how their families will meet Becca. Wills thinks the pressure is on as they are down to the wire. Becca shows up. She hugs them all. Blake thinks he might tell her he loves her. She tells them she is going to do three one on one dates and a group date. She chooses Colton first. The other guys look worried and jealous. Blake thought he would be getting a one on one today. None of them thought Colton would be chosen. They wonder of he will share his secret, that he is a virgin.

Becca and Colton walk the pier. They board a boat. Becca is happy. If things go well today she will meet his family next week. They stand at the front of the boat and kiss. He wants to tell her he is a virgin today. Just as he starts to tell her about his lack of experience, a yellow boat comes up. A man gets off and gets on their boat. He is going to teach them how to get conch. They get their snorkels and jump into the water. Becca gets a conch. They get back on the boat. The man is going to show them how to make a salad. They try a piece and Becca gags.

Colton thinks they have had a great day so far. He is nervous to tell her his secret. Later, they head back to the hotel for a quiet dinner alone. They toast to an awesome day. He tells her he wants to have a conversation with her. She looks nervous. He tells her that he has focused on his football career and not his personal one. He tells her because of that he is still a virgin. She is surprised. He is proud of that and wanted her to know. She gets quiet and asks to be excused for a second. She takes a walk to get fresh air. He sits and waits, wondering what she is thinking. He will be crushed if she can’t handle it.

Garrett thinks Becca choosing Colton would be crazy since he has never had sex. Becca returns to the table to see Colton. She knows it must have been tough for her. He tells her that his past serious relationship was hard. He is waiting for the right heart not marriage in particular. She tells him she would not judge him. She gives him a rose. He accepts. They kiss. She is happy and cannot wait to meet his family.

Blake tells the other guys he wants a one on one. There is a knock at the door. Leo gets an envelope. Garrett is the next one for a date. Colton shows up with his rose. The room goes quiet. Blake sits quietly upset. Colton admits their day was a game changer. Blake thinks maybe he could be making up everything in his head.

Becca meets Garrett at the beach. A small sea plane shows up to take them on their day. They get on and pop some champagne open. Some of the guys watch from their hotel balcony. Blake is tortured.  Blake and Garrett kiss and take in the views. They stop at a beach. It is just the two of them. They sit in the ocean, lie on the beach and swing on a tire swing. He tells her about how awkward the night before was. They talk about his upbeat side. Becca loves it. She also likes their chemistry.

There is a knock at the door. Blake is on edge. Colton opens the envelope. It is for Blake. The other three are angry. Becca finishes up her date with Garrett with a candlelight dinner. He tells her about his ex-wife and how she was hot blooded. He thought she was the one but she wasn’t. But he is falling in love with Becca. She seems like she would be the perfect wife for him. Becca gives him a rose. She is excited to meet his family. They kiss. She asks him to come with her. She isn’t ready to end the night. They walk to the beach and jump into the water.

Blake is so excited for his one on one date. Becca and Blake meet on the beach. They hug and kiss. Becca is excited. She wants to take a stroll on the beach. She has a surprise for him. They head down to a beach party and dance. They get on stage and dance. She feels good about him. She head off and sit alone and kiss. He tells her how lucky he is to be with her right now on the beach. He admits that he was in his head all week. He cares about her a lot. She understands. She explains that this process has been tough because she has made multiple connections. Blake didn’t expect to hear that.

The guys get a knock at the door. Garrett checks the date card. Wills, Leo and Jason will go on a date with Becca next. Meanwhile, Becca and Blake go out for dinner. She wants to know more about his family. He tells her that his parents divorced when he was 16. His mother had an affair with his English teacher and basketball coach. He doesn’t want to raise his kids like that. He wants to raise them in an open environment. Blake tells her that he finds it easy to open up to her. He tells her he is in love with her. They kiss. Becca loves to hear that. She gives him a rose. She can see a forever with him.

Wills is having a tough week. He wants this rose. Today is essential for him. The three get into a boat and head to meet Becca. They all hug her. She wants to have some fun. They play volleyball. She thinks Leo is funny. Jason is upbeat. She likes his energy. She also likes Wills because he is goofy and nerdy like her. She heads off to sit with Wills. He tells her this was a tough week for him. He really wants her to meet his parents. He talks about how great they are.

Becca sits with Jason. He tells her his week has not been easy but he has been staying focused on her and what they have. They kiss.

Becca meets with Leo. They kiss. He tells her he has had a tough week. They talk about hometowns. She is honest. They haven’t had enough time together. He feels like other guys have and he wouldn’t be ready to get down on one knee. She says goodbye to him. Becca goes to meet Jason and Wills. She tells them she has said goodbye to Leo.

Becca goes to meet with Jason Wills. She has a strong relationship with both of them. It is going to be hard to make a decision. She sits and thanks them for today. Jason thinks they have a tight bond. They go off to talk alone. They sit and kiss. Becca has questions. She wants to know about his family and possibly going home with him. She thinks he hasn’t been very vocal about his family. He tries to reassure her that he was hurt before but he likes her a lot. They part ways. Jason thinks he might have lost her.

Becca meets with both Jason and Wills. She gives the rose to Jason. She walks Wills out. They sit outside. She tells him that she feels bad but they are not on the same page. He leans forward and gets upset. She hugs him. He gets in the car.

Becca goes back to Jason. They kiss. Wills asks to get out of the car. He is crying outside.