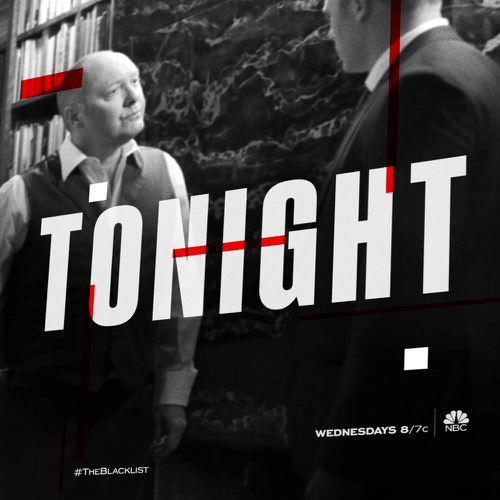 Tonight on NBC their hit drama The Blacklist starring James Spader airs with an all-new Wednesday, January 10, 2018, episode and we have your The Blacklist recap below. On tonight’s Blacklist Season 5 episode 10 called, “The Informant,” as per the ABC synopsis, “When Red directs the Task Force to find a Blacklister who uses his position of power to sell sensitive information, Ressler finds himself at risk of exposure. Meanwhile, Liz plans her next move.”

We are inside a nightclub and a guy is checking out this girl; she gets a phone call from her boss, Bronwyn and goes outside the bar to answer, passing the guy who was checking her out. Bronwyn wants a flight booked, the guy comes out of the club and all of a sudden foam starts to come out of his mouth, his eyes are red bloodshot – she heads back into the club to see that everyone is passed out on the floor and then she hits the floor as well.

Now we see Elizabeth, she is looking for clues on who killed Tom. Elizabeth is now with Red, she tells him that someone else killed Tom, it wasn’t Navarro. Red says that he wishes he knew more, he only knows that the men who were killed in her home where part of the Nash drug syndicate and he believes they were hired to go after Tom. Samar walks in and both she and Elizabeth exchange pleasantries.

Samar wants to tell Liz about a case, but she tells her that she doesn’t to hear about boring and domestic. Liz leaves and Red asks Samar about the nerve gas attack. Samar says that 57 people died. Red says that the US Treasury will most likely freeze the bank accounts of those who financed the attack and twelve hours ago a man known as an informant accessed a list of those accounts used by the Senate intelligence committee.

Samar is with Cooper, she tells him what Red said and furthermore, the informant plans to ransom back the accounts to the account holders themselves giving them a chance to transfer their assets before the treasury freezes them. Aram says that a senator was at dinner when his badge and access was used to access the computers. There are eleven members of his staff and only three that don’t have alibis.

Bishop is one of the guys and both Ressler and Samar are tailing him, he gets free. Bishop shows up at a police station and says that he saw a hit and run. He didn’t come forth right away because he is having an affair with judge Sonia Fisher. He says he is not proud that he is having an affair, but not a thief and didn’t steal any list. Cooper tells Red what happened with Bishop. Red tells Cooper that Liz is back and in troubled waters, he wants Cooper to help her navigate them.

Liz gets a visit from detective Singleton, he asks to come in and she says it is not a good time. He says that he is trying to find her husband’s killers, she offers him a cup of coffee. Red is now in the Cayman Islands, Red tells the banker that he needs account numbers and if can help him, he will refer business to him. Singleton and Liz go over her photos on her wall of the men who died in her home when Tom was killed.

Singleton asks Liz who took her to the hospital when Tom was killed and she says she doesn’t know. Singleton gives her a business card and leaves. Herman, the banker, introduces Red to Ms. Isaacson, who has a lot of tattoos, she identifies vulnerabilities but she doesn’t want to help him.

Red tells her that he knows this famous tattoo artist and will put her in contact with him if she gives him the account numbers. Samar and Aram tell Cooper that Red identified the names on the list, they believe the buyer is Romine Humsah. Cooper told them to keep a tail on Bishop. Liz is in her car, she stopped by this guy and asks him where Navarro is and she ends up handcuffing him to her steering wheel and he gives her a name – Liz now has both guys in her car, she is prepared to do anything to get Navarro.

Meanwhile, Ressler is tailing Bishop when he gets a call from Henry Prescott and is threatened if he continues to tail Bishop. Ressler sees Bishop switch briefcases with someone else and pulls a gun on him, Bishop says he just made a big mistake. Ressler is with Henry Prescott he had the call from and he knows about Ressler pretending to be Frank Sturgeon and hired him to dispose of the national security advisor, he calls him a crooked cop. Ressler says he can’t arrest him, but if he ever gets in touch with him again, he will kill him.

Samar is with Ressler, she asks him he remembers Henry Prescott, Bishop is his client. Liz has tracked down a guy named Peewee who launders money for Navarro, she tells him that he is going to bring her to him. Ressler and Samar visit detective Farewell, he says that detective Perez thought there was a dirty cop and thinks that is why she was killed. He then offers to give them the password for her computer with detailed accounting, it is Frank Sturgeon – Ressler looks like he is going to faint. Samar can tell something is going on with Ressler and asks him what it is.

They are in Perez’s apartment, Ressler finds her computer and he finds out that Henry Prescott is setting him up. Samar goes to see Cooper talk about Ressler, she tells him that his behavior is unsteady, Cooper noticed as well – they are both worried about him. Ressler is with Red, he knows about Prescott. Red tells Ressler that he set him up to see how far down the rabbit hole he had fallen, the good news he passed, Prescott asked him to look the other way and he didn’t.

Ressler and Red visit the judge, Ressler tells her that they have some questions. Ressler tells her that they know Perez was killed to cover up police corruption and Prescott got her to lie in order to protect the killer. She admits that she let guilty people walk free because once, her son attacked a girl and the rape kit disappeared, she also reveals that Prescott’s real name is Mitchell Hatley. The judge goes in the other room to get her purse and jumps out a window to her death.

Red brings Ressler to Mitchell Hatley aka Prescott and Ressler go to arrest him. Hatley tries to run, but Red stops him with his car door. Ressler arrests him. Liz finally finds Navarro. Ressler goes to see Cooper who tells him that Prescott was killed in an ambush, Red was the one who did it, he wasn’t going to see Ressler go to jail. Ressler gives Cooper a signed confession, he won’t accept it. Ressler goes to see Red and tells him that he didn’t ask him to kill Prescott. Red says that he killed him for himself, not for Ressler.

Liz tells Navarro that there was a man at her house the night her husband was killed and he had a Damascus name, she wants his name. Navarro tells her that Tom was not helping Nick, Nick was helping Tom. Navarro goes for her gun and the two struggle. He tries to strangle her, but in the end, she gets free and kills him.