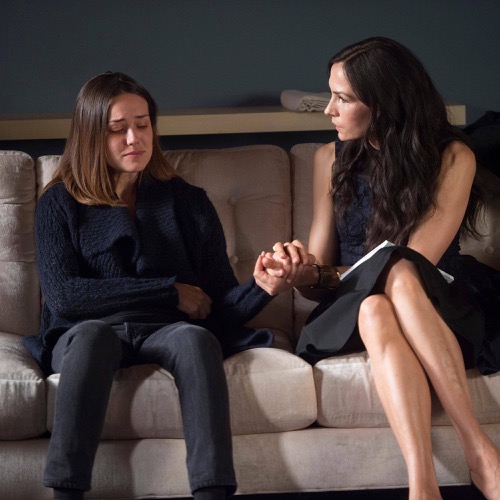 Tonight on NBC their hit drama The Blacklist starring James Spader airs with an all-new Wednesday, January 3, 2018, episode and we have your The Blacklist recap below. On tonight’s Blacklist Season 5 episode 9 called, “Ruin,” as per the ABC synopsis, “In the winter premiere, Liz (Megan Boone) abandons her old life and seeks out a fresh start in a place where no one knows her history, her name, or the depths of her grief. When an unexpected threat finds her, she is forced to draw on her emotional and physical strength in a brutal fight for survival.”

We see Elizabeth jogging in the forest. She returns to the cabin, takes some meds and grabs a bite to eat. She loses power and heads outside to the generator to fix it; it breaks down again so she heads to the hardware store.

A storm is coming, she picks up her supplies and heads back. Elizabeth has a flashback while she is trying to chop some wood of herself in the wheelchair and trying to get through physio. Colin brings a delivery to the door, it is a package for Elizabeth. Colin leaves, Elizabeth goes for a walk to Tom’s gave and puts a rose on it, tells him that she is not doing very well and starts to cry.

She tells him that she is thinking of going away. Elizabeth heads back to the cottage and the dog starts to bark. Outside, she draws her gun but nobody is there to hurt her. She finds a man on the ground and he has a serious wound on his side. Elizabeth gets him in the house and tends to the wound. She then tries to her radio transmitter to call someone, it doesn’t work and the car doesn’t start.

Elizabeth heads out on foot to get Colin to help. When she arrives there, she sees a photo frame and thinks of Reddington and when she asked him not to follow her. Elizabeth then writes Colin a note telling him there has been an emergency. She heads back to the cabin and the door is ajar, she finds other men in there and asks who the hell they are.

They claim their plane went down and they found the cabin; there are three of them. The men tell her that the man who is bleeding, his name is Mike. They want to get him to a hospital, but there is an ice storm. Another one of the men have an injury to his arm and Elizabeth starts to mend it. Elizabeth starts thinking back again about Tom and Agnes.

The ice storm is starting, Elizabeth tries to use the radio transmitter again. Colin shows up, he tells them its impossible to get through the roads with the weather. Elizabeth wants to go with Colin to get a radio from the plane – one of the men tries to talk her out of it, he tells her that she is needed in case Mike gets worse.

Elizabeth confides in Colin that something doesn’t seem right, the men say they were in a plane crash and there is not a broken bone amongst them. Colin tells her she is paranoid. Mike is waking up, he tells Elizabeth that the men are not his friends and will kill them. One of the men is from the Cartolucci family, they are in witness protection. The men are chatting with Elizabeth when she notices that her dog is gone and the man who left with Colin returns and says that Colin bumped into another ranger and they are heading into town to get help.

Elizabeth is still trying to find her dog, but she slips her gun in the back of her pants, puts a sweater on and heads outside to look for her dog. The generator stops again, Elizabeth tells them she is going to fix it. She heads back to the radio transmitter to call for help and notice the men are following her. She looks around she finds the dog dead and Colin. Elizabeth thinks back to when she told Reddington that she was trusting Agnes with Scotty and Tom’s mother.

Reddington says he will respect her decision but he wants her to grieve; he thinks she is running away from her problems and she has to face them. Elizabeth connects with one of the men, Billy, she tells him that she knows they killed Colin and her dog. Billy tells her that this is not going to end well for her. She then goes on to tell him that her name is Elizabeth, she is an FBI profiler and she has out small glass shards in those little ice cubes that he loves to chew so much. One of the men hits the floor and is dead, Elizabeth also drugged the food.

The other men load up on their weapons and head out after Elizabeth. Billy walks right into a bear trap and rips his foot open. The men head back into the cabin and Mike is gone. Another man down, Elizabeth traps him underground and sets fire to him. Elizabeth makes it to the rangers office, Billy is there, she douses him with gasoline then shoots a flare at him and sets him on fire. The next day authorities are looking for Elizabeth, aka Grace but nobody in town has anything to say.

Meanwhile, Elizabeth is on the road, she is hitch hiking away. Elizabeth makes her way to see Reddington, she tells him that she is healed and strong. She thanks him for honoring his promise and apologies to him because she couldn’t honor her promise. She says she wasn’t looking for trouble, it found her. She killed some men, they were bad, and she didn’t lose any sleep over it. Reddington tells her she will, it is only a matter of when. Elizabeth says all that matters is that she is healed, she is back and coming after Tom’s killers. Reddington kisses her on the cheek and tells her yes, then asks her if she will be able to forgive herself.