The Bold and the Beautiful Spoilers: Another Lope Wedding Crisis – Taylor and Brooke’s War Derails Ceremony, Liam Faces a Choice

BY Heather Hughes on August 15, 2018 | Comments: one comment
Related : Soap Opera, Spoiler, Television, The Bold and the Beautiful 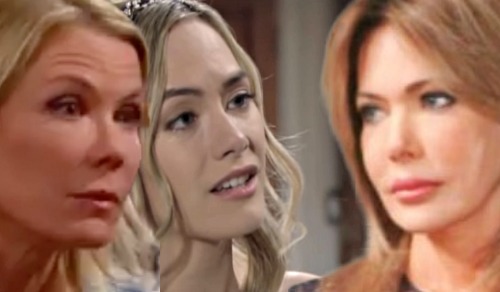 The Bold and the Beautiful (B&B) spoilers tease that Hope (Annika Noelle) will be on cloud nine over her upcoming nuptials. She’ll push aside any doubts and concentrate on how close she feels to Liam (Scott Clifton). Hope will think things are going to be different this time. Bill (Don Diamont) hasn’t manipulated anyone into tying the knot and Steffy (Jacqueline MacInnes Wood) gave them her blessing.

Hope won’t see any reason for this wedding to cause drama. She’ll probably expect smooth sailing, but a big mistake will bring rocky waters. Hope’s decision to invite Steffy and a plus one will cost her. She was probably hoping Steffy would walk in with some new man on her arm. Hope might’ve viewed that as an insurance policy on Liam standing by her.

Unfortunately, Steffy will bring her scheming mother instead. The Bold and the Beautiful spoilers say Taylor (Hunter Tylo) will agree to attend, but that’s only because she’ll have a goal in mind. She won’t think Steffy knows what she’s doing here. Taylor will feel like she has to intervene before Steffy loses the man she loves and the father of her child.

Steffy will assure Taylor that she’s made peace with this outcome. She’ll believe she can watch Liam and Hope begin their future together. Steffy will likely warn Taylor not to make a mess, but that’s wishful thinking.

Brooke (Katherine Kelly Lang) will also be concerned about the chaos that might be brewing. It turns out her intuition will be correct. Taylor is indeed cooking up something big!

The Bold and the Beautiful spoilers say Taylor will reach out to Liam. She’ll want to talk him out of marrying Hope, but Brooke will catch her in the act. That’ll spark a major confrontation at the worst possible time.

It looks like a shouting match will break out and derail the wedding anyway. Brooke’s attempt to stop the sabotage could inadvertently make matters worse.

However, another botched “Lope” wedding seems like overkill. Perhaps Liam will settle everyone down and get the nuptials back on track. B&B may not be ready to let Liam and Hope’s relationship end just yet. There’s probably a lot more story to play out before a “Steam” reunion happens.

Of course, Brooke and Taylor’s conflict could continue long after Liam and Hope say “I do.” They may make life pretty messy for their daughters in the coming weeks! We’ll give you updates as other B&B news comes in. Stay tuned to the CBS soap and don’t forget to check CDL often for the latest Bold and the Beautiful spoilers, updates and news.