The Bold and the Beautiful Spoilers: Ashleigh Brewer Exits B&B – Ivy Out at the CBS Soap

BY Heather Hughes on January 31, 2018 | Comments: one comment
Related : Soap Opera, Spoiler, Television, The Bold and the Beautiful 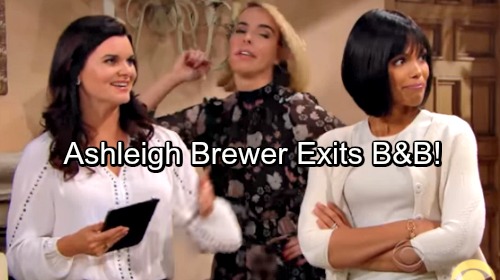 The Bold and the Beautiful (B&B) spoilers tease that Ashleigh Brewer (Ivy) has big plans for the future. In an interview with The Herald Sun, Brewer revealed that she’s leaving the CBS soap to pursue other acting jobs. B&B hasn’t been giving Ivy much airtime anyway. Now that Hope’s (Annika Noelle) back in the picture, Ivy would be getting even fewer scenes. Perhaps Brewer decided it was best to bail.

In her earlier acting days, Brewer starred on Neighbours. The Australian soap also featured Margot Robbie, who’s a close friend of Brewer’s. Obviously, Robbie went on to achieve great success. She’s got a solid film career and an Academy Award nomination to prove it.

Brewer noted that Robbie’s been pushing her to think bigger and better. “It’s definitely time for me and I’ve had Margot encouraging me for so long (saying) just leave it and see what happens,” Brewer said. “So I’m throwing caution to the wind now and keeping myself open to opportunities.”

Brewer added that she’s been doing soaps for 10 years now, so she’s ready for a change. She feels like branching out is “daunting, but exciting.” Brewer currently has a couple projects in post-production. One’s called At the Edge of Night and the other is a TV movie called My Dinner with Herve.

Ditching The Bold and the Beautiful could clear Brewer’s schedule for future gigs. It’s probably a hassle to squeeze in brief scenes here and there. Since B&B doesn’t seem to have anything for Ivy to do, Brewer might as well devote her time and attention to other possibilities.

She once called Australia home, but Brewer intends to stick around Los Angeles to seek more work. “I’m doing the acting thing in LA, onwards and upwards,” Brewer said. In a recent interview with Soaps In Depth, John McCook (Eric) suggested that he wanted to see more of Ivy. He liked the idea of exploring Ivy’s background and bringing new family members from her past into the Forrester fray.

Sadly, that’s not going to happen. It sounds like B&B will simply write Ivy out or ignore her as usual. Thanks to Steffy (Jacqueline MacInnes Wood), Sally (Courtney Hope) and Hope, Ivy got shoved aside. Nevertheless, Brewer seems to be excited about this new chapter. Soap fans wish her the best of luck!