The Bold and the Beautiful Spoilers: Bill and Katie Feel Familiar Spark, ‘Batie’ Back On – Thorne’s No Match for Sneaky Rival

BY Kinsley Goldman on August 18, 2018 | Comments: one comment
Related : Soap Opera, Spoiler, Television, The Bold and the Beautiful 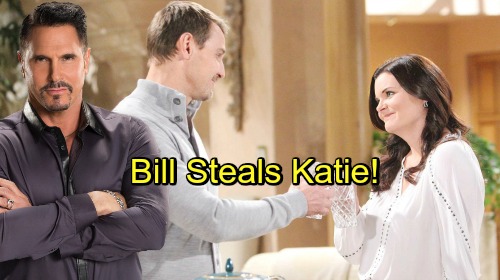 The Bold and the Beautiful (B&B) spoilers tease that Bill (Don Diamont) will grow increasingly protective of Katie (Heather Tom). He tends to be pretty territorial when it comes to the women in his life. Bill also gets obsessed when he falls in love. All of that should add up to serious issues for Katie and Thorne (Ingo Rademacher).

Bill has already made it clear that he disapproves of this romance, but things will only get worse as time goes on. Will (Finnegan George) will also be a big factor in this potential love triangle. Bill may manage to use his son to his advantage in the weeks ahead.

B&B fans saw an emotional moment between Katie and Bill recently. Since Bill has been neglecting Will a bit, he found it tough to reconnect with him. After a fight, both parents broke down in tears. Katie gently encouraged Bill to be a better man than his father and give Will the attention he deserves.

That scene seemed like a sign that “Batie’s” back on! Of course, it’ll take some time to get to a full-fledged reunion. However, pairing them up again makes sense. Wyatt (Darin Brooks) has moved on with Sally (Courtney Hope) and Thorne has turned into a bland character. Katie needs somebody who can spice up her life, so it might as well be her ex.

Likewise, Brooke (Katherine Kelly Lang) is sticking with Ridge (Thorsten Kaye) and Steffy (Jacqueline MacInnes Wood) just doesn’t have that kind of love for Bill. He’ll probably need another special someone, so that’s where Katie could come in. It may not be long before Bill’s feelings grow stronger.

There’s a good chance Bill and Katie will continue to bond over Will. Even more conflict could bring out the sexual tension between them. They might be surprised by the familiar spark. Once that’s reignited, you can bet Bill will chase after Katie with everything he’s got. Bill always throws himself at a woman when he wants her.

Thorne could present a problem, but that’s nothing Bill can’t handle. The Bold and the Beautiful spoilers hint that Thorne will keep fighting, but Bill could have a few tricks up his sleeve as usual. He might play dirty to make sure he wins the battle for Katie’s heart.

Are you on board for another round of “Batie” or are you rooting for Thorne? Regardless, Bill may be poised to emerge victorious. We’ll give you updates as other Bold and the Beautiful news comes in. Stay tuned to B&B and don’t forget to check CDL often for the latest Bold and the Beautiful spoilers, updates, and news.