BY hellodrdavis on November 6, 2018 | Comments: one comment
Related : Soap Opera, Spoiler, Television, The Bold and the Beautiful 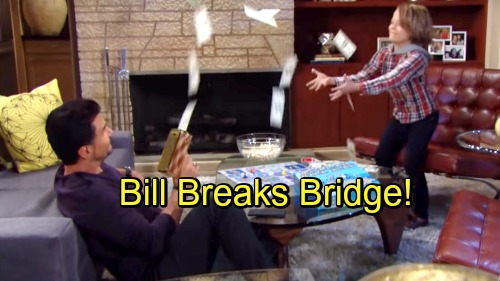 The Bold and the Beautiful spoilers tease that Bill (Don Diamont) will soon look to Brooke (Katherine Kelly Lang) for information. Bill’s just found out from Justin (Aaron D. Spears) that someone matching Ridge’s (Thorsten Kaye) description was seen talking to Judge McMullen (Joe Lando) in the days leading up to the custody hearing.

Bill’s sixth sense told him that something wasn’t right about the custody ruling. Sure, Katie (Heather Tom) made some good points during the hearing, but Bill just didn’t see the judge’s rationale for giving Katie sole custody. Bill’s always suspected that something was awry, and now Justin’s new intel seems to confirm it.

But Bill wants proof that it was Ridge who set up the judge’s ruling. And he knows exactly who to ask about it…Brooke. B&B spoilers say that Bill will grill Brooke about Ridge’s possible influence over the judge in the custody case. Of course, Bill doesn’t know whether Brooke knows anything about what Ridge did, but he’ll figure he can push her a little and see what gives.

Plus, cornering Brooke about the matter give Bill an excuse to interact with Brooke, which he desperately wants, since he’s decided that he wants Brooke back. It also gives Bill the opportunity to help drive a wedge between Brooke and Ridge, which he’ll be all too happy to do.

So, Bill will ask Brooke straight out whether Ridge improperly influenced the judge. But it looks like Brooke won’t give Ridge up, although she’ll squirm a bit. Chances are, Bill will get all the information he needs by just watching Brooke stumble around the issue.

And, of course, Brooke will feel compelled to go back to Ridge and let him know that Bill’s asking a lot of questions about possible judge tampering. This will upset Ridge, but what will probably upset him more is that Brooke was in Bill’s presence in the first place.

Bill’s coming after Ridge in two ways…on the custody front and by going after Brooke. It sure looks like Bill’s got the upper hand right now. Does Ridge stand a chance? Stay tuned to the CBS soap and don’t forget to check CDL often for the latest Bold and the Beautiful spoilers, updates, and news.