The Bold and the Beautiful Spoilers: Bill Discovers Ridge’s Judge Tampering – Brooke Caught In The Middle

BY hellodrdavis on October 28, 2018 | Comments: one comment
Related : Soap Opera, Spoiler, Television, The Bold and the Beautiful 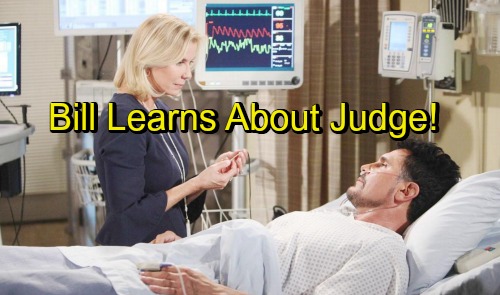 The Bold and the Beautiful spoilers tease that Bill (Don Diamont) will learn some unsettling information about his custody case. In the case, Bill lost shared custody of Will (Finnegan George) in a stunning ruling against him. Bill couldn’t believe that the judge would rip Will away from him so ruthlessly, but some new information will shed light on why the ruling went down the way it did.

According to B&B spoilers, Justin (Aaron D. Spears) will do a little digging into Judge McMullen’s (Joe Lando) background, and he’ll turn up something that’s very interesting. Chances are, he’ll uncover a connection between the judge and Ridge (Thorsten Kaye), but it looks like he won’t find concrete evidence that Ridge influenced the judge.

Whatever Justin finds, it will be enough to arouse suspicion in Bill’s mind that Ridge may have had something to do with the custody case outcome. Of course, now that Katie is essentially allowing Bill the benefits of joint custody, he doesn’t need to re-open the case, but he’ll want to know for sure whether Ridge did something to throw the case.

And for that, Bill may turn to Brooke (Katherine Kelly Lang) for answers. But Brooke is going to be in a difficult spot. She’s loyal to Ridge, but she knows that Ridge pressured the judge and she feels that this was a great injustice. She deeply disagrees with what Ridge did, and there’s a part of her that feels that Bill should know what went down.

But Brooke also knows that Bill can be ruthless, and that he would retaliate against Ridge if he learned what Ridge did. She won’t know what to do, but she’ll be pulled strongly in Bill’s direction as the two continue their secret meetings. And of course, she’ll be pulled in Ridge’s direction, too, as Ridge’s wife

Do you think Brooke will tell Bill that Ridge tampered with the judge? Or will she warn Ridge that Bill is onto him? Stay tuned to the CBS soap and don’t forget to check CDL often for the latest Bold and the Beautiful spoilers, updates, and news.