The Bold and the Beautiful Spoilers: Bill Makes A Play For Katie – Thorne Loses To Rival 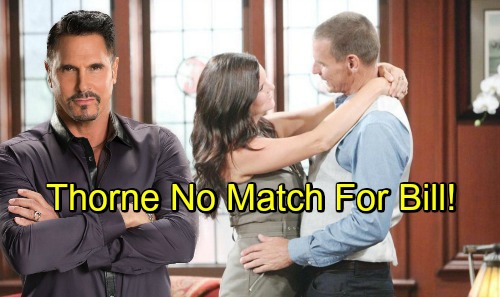 The Bold and the Beautiful spoilers teased the storyline setup where a revived Batie with battle Korne for Katie’s (Heather Tom) heart. As B&B viewers saw, Bill (Don Diamont) still elicits strong emotion from his ex-wife and so the fight is on.

Devoted daytime fans know that the Liam (Scott Clifton) character was created a calendar year after Diamont was cast as the lead Spencer on B&B. Dollar Bill was introduced in the spring of 2009, just months before Bill, Senior (played by Jim Storm), died. Storm was a daytime legend, having famously portrayed Gerard on the iconic Dark Shadows horror steamer in the early 1970’s.

At the time, Liam was said to be the product of Kelly’s connection to either Bill, or Thorne (as then played by Winsor Harmon). The Kelly character was never shown, but only referenced. She’s presumed dead, just as Bill was eventually presumed to be Liam’s biological father via a DNA test.

Steffy’s (Jacqueline MacInnes Wood) naming of Steam’s first-born child Kelly, who is presumed to be Liam’s daughter via a DNA test, circles one of this feature’s setup’s. Soapy science can always, yes, always be altered later, based upon TPTB’s feelings at future points in time, say 2018.

So, how does B&B’s presented memory refresher, or new intel for more recent viewers play into current scenes?

Katie’s recent request that Bill take Will (now played by Finnegan George, who took over for Tom’s real life son Zane Alexander Achor) represented the opening, or reopening of the Bill-Thorne (now played by Ingo Rademacher) conflict. Historical conflicts tie Liam as a source of drama between both men. That played into why Thorne told Bill how Will should be handled.

Bill’s recognition that Will had changed since he’d last had regular contact with his third-born son led to a touching scene. Diamont’s character had a recent epiphany, where he recognized and ceased his manipulative behavior toward Steam. He apologized to both parties, gave Steffy all of his Forrester shares, and told Liam that he hoped for eventual forgiveness.

Katie tearfully told Bill that he was a great father and simply needed to focus on Will. Tears also dropped from Diamont’s right eye, likely via soapy spraying that creates the effect. Katie’s hands tenderly touched Bill’s face during a brief dialogue mention about this pairing not reviving. And there it was, the possibility presented.

Batie could reform, not because Bill would be trying to block Thorne, but because Katie was once open to Diamont’s character and shares a child with him. The same dynamic leaves Steam as an ever-potential duo revival as well.

Thorne doesn’t see it, yet. But Bill, the man who once defeated him to be recognized as Liam’s true dad, is a threat to the burgeoning Korne relationship. Viewers, old, new and in between, this is good soap!