The Bold and the Beautiful Spoilers: Bill’s Redemption Changes the Game – Becomes Viable Option for Steffy, Not Just Creepy Stalker

BY Heather Hughes on August 9, 2018 | Comments: one comment
Related : Soap Opera, Spoiler, Television, The Bold and the Beautiful 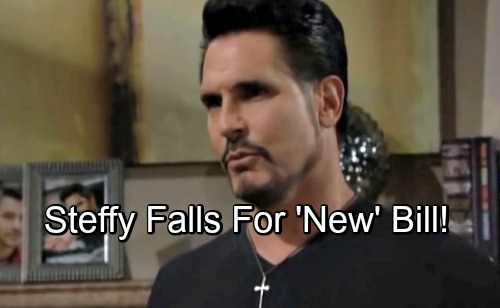 The Bold and the Beautiful (B&B) spoilers tease that Bill (Don Diamont) will keep his promise to Steffy (Jacqueline MacInnes Wood). He finally understood that he was wrong to chase after her like that. Bill regrets hurting both Steffy and Liam (Scott Clifton), so he’s trying to become a better man.

That doesn’t mean Bill will ever be a saint, but B&B is seemingly trying to redeem him a bit. They couldn’t let Bill go on looking like a deranged stalker. Bill will make Katie (Heather Tom) miserable soon, so it’s not like he’s going through a personality overhaul. “Dollar Bill” is always going to be a stubborn troublemaker, which is good news for fans. He certainly adds a lot of drama with all his antics.

However, Bill will hopefully steer clear of any crazy schemes for a while. There’s a line when it comes to darker characters. You can only push it so far unless you want them to become moustache-twirling scoundrels. It looks like The Bold and the Beautiful will rein Bill in, so this creates an interesting story opportunity.

Steffy recently decided she wasn’t in love with Bill and just couldn’t marry him. That’s reasonable since Bill spent months obsessing over Steffy and creating so much chaos in her life. Who could love a man like that? Nevertheless, things could shift now that Bill’s changing his attitude. He’s backing off and doing his own thing, which could actually be the way to Steffy’s heart.

Liam’s set to marry Hope (Annika Noelle), so Steffy will try to put him behind her. Bill will continue to carry a torch for Steffy, so he may be waiting if she changes her mind again. Now that we’ve got this new-and-improved Bill, could Steffy eventually view him as a real option?

Many Bold and the Beautiful viewers are starting to soften toward Bill slightly. Twitter users were definitely impressed by Bill’s emotional speech to Liam. One fan wrote, “Don Diamont is so good…and I say this as someone who has found Bill to be profoundly creepy and obsessive for most of this year.”

Another B&B watcher suggested that Steffy “should give Bill a chance after being alone for a while.” Is “Still” rising? Will Bill show Steffy that he can be a mature, viable love interest? We certainly can’t rule out that possibility. The Bold and the Beautiful spoilers say Steffy’s path will be surprising, so you never know what might be in store.

It sounds like love will remain complicated on the CBS soap. We’ll give you updates as other details. Stay tuned to B&B and don’t forget to check CDL often for the latest Bold and the Beautiful spoilers, updates, and news.