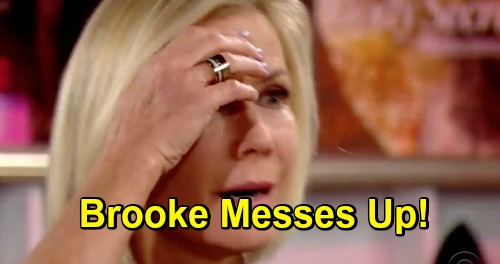 The Bold and the Beautiful (B&B) spoilers tease that Brooke (Katherine Kelly Lang) will reel over Hope’s (Annika Noelle) revelation that Taylor (Hunter Tylo) shot Bill (Don Diamont). She knew Taylor was angry and aggressive, but she’ll think this is a new low – even for her worst enemy. Taylor hoped to murder Bill in his own home and that’s just diabolical, insane or both.

Brooke won’t understand why Taylor isn’t behind bars right now. She’ll undoubtedly think that’s exactly where Taylor belongs. If not, Brooke will at least think Taylor should be locked up in a mental institution. On December 3, Hope will share all the info Liam (Scott Clifton) gave her. She’ll explain the details and argue that she just wanted Brooke to be aware of the peril.

Brooke will be aware all right! She’ll seethe over the fact that Taylor nearly killed Bill and still thinks she can go around passing judgment. The Bold and the Beautiful spoilers say Brooke will decide she needs to hear her ex’s side of the story. It’ll be a great excuse to see Bill anyway. These two can never avoid each other for too long.

Once Brooke arrives, she’ll admit she knows about Taylor’s vicious actions. On December 5, B&B fans will see Bill brush the incident off. He’ll suggest that he can see why Taylor was driven to it. Bill has regrets about pursuing Steffy (Jacqueline Macinnes Wood) and making a mess of her relationship with Liam. He knows that Taylor wouldn’t have resorted to such violence if he’d been a better man.

As someone who’s done some pretty terrible things, Bill doesn’t have much room to talk. He may remind Brooke of that and point out that he’s trying to focus on the future. Bill will reiterate that he’s changed and has no interest in getting revenge by turning in Taylor.

Brooke still won’t understand why Bill isn’t seeking justice, so he’ll make himself crystal clear. The reason is her! Bill will credit Brooke for making him want to see the good in life. He’ll assure Brooke that he wants to make up for his own mistakes and excusing the mistakes of others is a nice start.

The Bold and the Beautiful spoilers say Brooke will be surprised and impressed, but that doesn’t mean she’ll give Taylor a pass herself. Brooke’s only going to make a bigger mess as time goes on. We’ll give you updates as other B&B news comes in. Stay tuned to the CBS soap and don’t forget to check CDL often for the latest Bold and the Beautiful spoilers, updates and news.