BY hellodrdavis on October 3, 2018 | Comments: 2 comments
Related : Soap Opera, Spoiler, Television, The Bold and the Beautiful 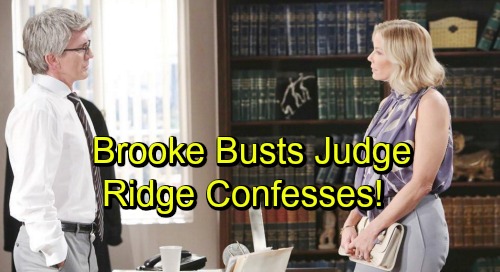 The Bold and the Beautiful spoilers tease that Brooke (Katherine Kelly Lang) will have her suspicions after Judge McMullen (Joe Lando) makes his ruling in the custody case between Katie (Heather Tom) and Bill (Don Diamont). It certainly looks like the judge will rule in Katie’s favor, and Katie will be awarded full custody of Will (Finnegan George)…and Brooke will want some answers.

Of course, viewers know that Ridge heavily pressured his old friend Judge McMullen to find in favor of Katie in the case. Ridge called in a favor, as he had loaned the judge money for him to attend law school back in the day. Ridge also misled the judge into thinking that Bill’s encounter with Steffy (Jacqueline MacInnes Wood) was not consensual. Totally inappropriate.

Brooke will likely be tipped off that something untoward happened with respect to the judge’s decision by both the judge’s and Ridge’s (Thorsten Kaye) strange behavior in the courtroom. She may catch some glances between Ridge and the judge, and B&B spoilers say that Ridge’s actions will weigh heavily on him, so he may be acting strange.

Brooke will be suspicious enough to look for evidence of judge tampering, and B&B spoilers say she’ll find some. She may go snooping among Ridge’s things, and if she does, she just might find Ridge’s burner phone, which he’s been using to send text messages to the judge. That would be pretty damning evidence!

Armed with the evidence she finds, Brooke will pay Judge McMullen a visit, probably to verify her suspicions and find out the whole truth about what Ridge did, and then she will confront Ridge directly. Look for a major showdown as Brooke tears into Ridge for his actions. It looks like Ridge will have no choice but to come clean about what he did, especially since Brooke will have evidence of his activities.

Brooke and Ridge will be at a critical point, and Brooke will have to decide what to do next. Will she go to Bill and let him know what’s happened? The Bold and the Beautiful spoilers indicate that she will tell Bill that Ridge is responsible for the custody ruling. Will she turn the judge in for being unduly influenced? Her next move remains to be seen, but she’s certainly got the upper hand now.

What do you think Brooke’s next move will be? Stay tuned to the CBS soap and don’t forget to check CDL often for the latest Bold and the Beautiful spoilers, updates, and news.