The Bold and the Beautiful Spoilers: Brooke’s in Danger – Will Bill Break His Promise And Turn Taylor In?

BY Kinsley Goldman on November 26, 2018 | Comments: one comment
Related : Soap Opera, Spoiler, Television, The Bold and the Beautiful 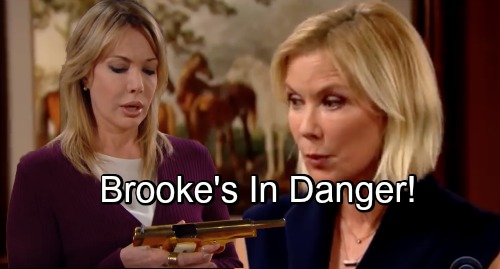 The Bold and the Beautiful (B&B) spoilers tease that Brooke (Katherine Kelly Lang) and Taylor (Hunter Tylo) have another battle ahead of them. Whenever Taylor’s around, she always finds a reason to lash out at her enemy. Taylor and Brooke’s latest round of hostility will revolve around Hope (Annika Noelle). It Taylor’s mind, she’ll view Hope as a man thief and someone who can’t be trusted.

After Taylor rips into Hope and causes great distress, Brooke will hit the roof. She’ll think Taylor’s behavior is totally uncalled for. Brooke will insist that Taylor needs to leave Hope alone and worry about herself. She’ll think it’s clear that Taylor’s irrational and even a little off her rocker. Brooke will be fed up from years of sparring with Taylor, so she’ll really let her have it.

Of course, Taylor will fire back with everything she’s got. She’ll deliver plenty of low blows during this fierce fight. B&B fans will definitely hear several cruel insults and intense warnings. Brooke and Taylor won’t back down from each other, so this won’t be the last faceoff they have. However, it could be a crucial moment that defines what’s next for Taylor.

The Bold and the Beautiful spoilers say Hope will learn the truth about Bill’s (Don Diamont) shooting. After Liam (Scott Clifton) spills the beans, Hope will fill her mom in as well. Naturally, it’s just a matter of time until Brooke has a conversation with her ex. She’ll wonder why Bill didn’t seek justice right after he found out what Taylor did.

Bill should explain the tricky situation and how he made a promise to protect Taylor’s secret. He agreed for Steffy’s (Jacqueline MacInnes Wood) sake at the time, but he intends to stand by his vow. Could Brooke change Bill’s mind about that? There’s a good chance she’ll fear a violent threat to Hope or herself.

Brooke may feel like Taylor’s refusing to get the help she needs. She might argue that Taylor’s loved ones are just enabling her unhinged behavior. Bill really wants to avoid Brooke’s bad side, so what’ll happen if she tells him to turn in Taylor? Will Bill cave in? What about if Hope pushes for this on behalf of her mother?

Hope could convince Bill that there was a genuine threat to Brooke’s safety. If Taylor would pump a bullet in one person she loathed, she could certainly do it to another. Will Bill break his promise and rat Taylor out to the cops? We’ll give you updates as other Bold and the Beautiful news comes in. Stick with B&B and don’t forget to check CDL often for the latest Bold and the Beautiful spoilers, updates and news.