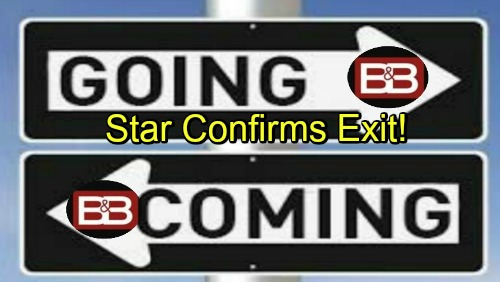 The Bold and the Beautiful (B&B) spoilers reveal that we’ve got some comings and goings news to share. First, let’s address Reign Edwards’ role on the CBS soap. B&B fans know her as Nicole Avant Dominguez, but she doesn’t pop up much these days. At the Daytime Emmys, Edwards confirmed that she’s no longer on the show.

However, there could be good news. Despite her absence lately, Nicole’s still a recurring character. She could be summoned anytime for some hot plots. In fact, the Avant family seems to have a big story coming up this summer.

Adain Bradley will debut as Alexander Avant, Julius’ (Obba Babatunde) nephew, in June. Will The Bold and the Beautiful let Nicole back in the picture to meet him? Perhaps she’ll return and get caught in all the chaos at some point. Many B&B fans would undoubtedly like to see Nicole again, so we’ll keep our fingers crossed.

Fortunately, Edwards has been staying busy during her time away from The Bold and the Beautiful. She’s been featured on CBS’ MacGyver as well as FX’s Snowfall. The latter will kick off its new season in July, so Edwards will continue in that recurring gig. She also has a new film called Hell Fest coming out pretty soon.

Other Bold and the Beautiful spoilers say Jennifer Gareis is headed back to B&B as Donna Logan. She’ll return on May 24 as well as May 25. Of course, Donna will be around for a wedding! Family events tend to bring Donna back to celebrate with her loved ones. This time Liam (Scott Clifton) and Hope (Annika Noelle) will be the ones tying the knot, but will they actually complete the ceremony?

No one would be surprised if these nuptials get derailed. Steffy (Jacqueline MacInnes Wood) just might interrupt with some baby drama, so stay tuned. That’s it for comings and goings. We’ll give you updates as other B&B details emerge. Stick with the CBS soap and don’t forget to check CDL often for the latest Bold and the Beautiful spoilers, updates, and news.