The Bold and the Beautiful Spoilers: Comings and Goings – Tough Judge Presides Over Will Custody Battle – Court Shockers Ahead

BY Heather Hughes on September 10, 2018 | Comments: one comment
Related : Soap Opera, Spoiler, Television, The Bold and the Beautiful 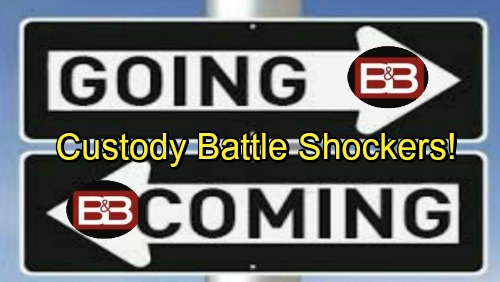 The Bold and the Beautiful (B&B) spoilers reveal that we’ve got some comings and goings news to pass along. For starters, Keith Carlos will reappear as Danny on September 11. He may have a hand in what Xander’s (Adain Bradley) cooking up. Things have been tense since Zoe (Kiara Barnes) came to town, but Xander will still want Emma (Nia Sioux) to know she’s special.

B&B fans can expect a romantic gesture from Xander. He’ll reserve a beachside cabana, so maybe Danny will provide the drinks. Unfortunately, The Bold and the Beautiful spoilers say Xander won’t get the result he was anticipating. Emma really enjoys spending time with Xander, but she’ll think they’re moving too fast. She’ll suggest that they’ll have to wait on taking their relationship to the next level.

Zoe will do her best to use Xander’s disappointment to her advantage. She’ll let Xander know that’s she’s fine with sex anytime. Zoe will plant a kiss on Xander and get him all worked up, but Emma will return to mind. He’ll be torn as he considers his next move.

Speaking of moves, Thorne (Ingo Rademacher) will prepare for a big one. Finnegan George will return as Will on September 14, so Thorne will be spending more time with the kid. He’ll naturally hand around Katie (Heather Tom) as well. Thorne will insist that he likes what they’re building together. He’ll feel like they could become a real family, so he’ll pop the question and score a yes.

Of course, Bill (Don Diamont) isn’t going to be happy about this startling development. He’ll be even more determined to win the looming custody battle. On September 20, The Bold and the Beautiful spoilers say Joe Lando will pop up as Judge Craig McMullen.

One Life to Live and Guiding Light fans may recognize Lando from his earlier soap days. Lando also spent five years on Dr. Quinn Medicine Woman. It should be interesting to see how he tackles the role of Judge McMullen. Something tells us he’ll be a no-nonsense kind of guy. Judges usually are!

That’s it for comings and goings. We’ll give you updates as other B&B details emerge. Stay tuned to the CBS soap and don’t forget check CDL often for the latest Bold and the Beautiful spoilers, updates and news.