The Bold and the Beautiful Spoilers: Did Bill Do The Right Thing – Will Liam Move On With Hope?

BY Sean O'Brien on April 7, 2018 | Comments: one comment
Related : Soap Opera, Spoiler, Television, The Bold and the Beautiful 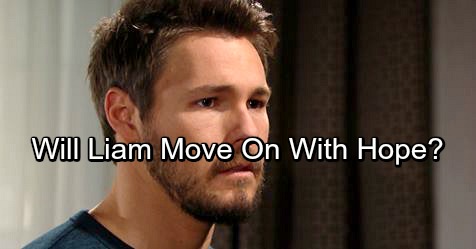 The Bold and the Beautiful spoilers documented Bill’s (Don Diamont) plight to-date. From the Spectra Fashion fight, subsequent building disaster, repairing of his relationship with Liam (Scott Clifton), further blowout due to the Steffy (Jacqueline MacInnes Wood) incident and then the shooting. But even the most ardent Dollar Bill detractor should be willing to admit that he’s honestly given Liam a second chance.

Hope (Annika Noelle) actually pushed this father-son combo together. She unexpectedly raised her voice to Bill, adamantly telling him that Ridge (Thorsten Kaye) deserved to be freed from prison and that Liam didn’t deserve to be jailed because he wasn’t himself on the night in question. Bill loudly rejected her plea and appeared to be nearing a physical crisis, as he was holding his chest and had trouble breathing.

But Bill calmed down and opted to follow Hope’s advice after Detective Sanchez (Jeremy Ray Valdez) entered the hospital room. Repeated questioning allowed Bill to claim that his memory had cleared.

Bill said that he saw a reflection of someone in the window, but didn’t recognize him. It wasn’t anyone he’d ever seen before. That cleared Ridge, but momentarily left Liam vulnerable.

B&B’s camera work was terrific during this sequence. Diamont, Clifton and Noelle exchanged quick, pained glances with each other as the detective continued to press Bill. Sanchez knew that the change in story meant Ridge couldn’t remain behind bars.

Bill refused to tag Liam as his shooter, even though his son just admitted to being that before Hope and then Sanchez joined them. After the detective left, Liam was fully grateful.

While it appeared as though Bill was speaking in cloaked language, that seemed to imply that he no longer considered Liam to be his family and that he never wanted to see him (Liam) again, such was not the case. Bill apologized for all the pain they’d caused each other and extended his hand.

Liam’s acceptance of his father’s apology and dispensation resulted in a handshake and a pronounced sigh of relief offered by Clifton’s character. Finally, this duo made peace.

There personalities won’t change. But it does feel likely that Bill and Liam won’t attack each other, either verbally or physically in the near future, due to the heavy storylines both characters were written through.

Liam should follow his dad’s full advice and repair his marriage with Steffy. But Hope’s charged defense had an obvious impact. Their impassioned kiss also foreshadows the revival of Lope, instead of the continuation of Leffy.

Liam’s shocking response to Steffy’s request to forgive and forget, to move on together, was rejection as he told his wife to move on with Bill. B&B fans can see that it will take something major before Liam agrees to return to his wife. CDL is a leading source for everything linked to The Bold and the Beautiful. Check back regularly for B&B spoilers and news!