The Bold and the Beautiful Spoilers: Exciting Week of September 3 Promo – Hope and Steffy’s Fierce Faceoff – Bill’s Rage Boils Over 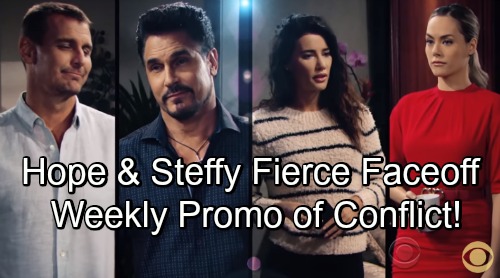 The Bold and the Beautiful (B&B) spoilers for week of September 3-7 tease that we’ll see some intense rivalries. First, let’s talk about the brewing custody battle. As Bill (Don Diamont) and Katie (Heather Tom) prepare to go before a judge, the conflict will rev up. Naturally, Thorne (Ingo Rademacher) will remain in the middle of it. He’ll manage to get Bill even more riled this week.

Thorne will note that Katie isn’t Bill’s wife anymore, so he should just back off. Of course, Bill will remind Thorne that Katie isn’t his wife either. Thorne may point out that he’s committed to Katie. In his book, that’s close enough. If their romance stays on this path, Thorne certainly wouldn’t rule out marriage one day.

Regardless, Thorne is prepared to stand with Katie and help her win this custody case. Despite Bill’s serious threats, Thorne won’t be scared. He’ll feel confident that he can handle the angry Spencer and whatever blows he delivers. Thorne had better hope so! If this plan backfires, Katie could easily come to resent Thorne for planting the idea in her head.

Meanwhile, a Forrester Creations war will get underway. The Bold and the Beautiful spoilers say Ridge (Thorsten Kaye) will have some unfortunate news. It appears FC can’t fund both the bedroom collection and the Hope for the Future line. Ridge will have to cut one of them, so Hope (Annika Noelle) and Steffy (Jacqueline MacInnes Wood) will be at odds.

B&B fans can expect some heated faceoffs. Steffy will declare that Forrester is a lifeline for her. She already lost Liam (Scott Clifton), so she’ll refuse to let Hope take this away, too. However, Hope won’t see why she should give up her line for Steffy’s. The intimates reboot is still trying to get off the ground, so Hope will think her line should be the clear winner.

No matter what Ridge decides, this could reignite Hope and Steffy’s feud for good. Will this lead to some Liam clashing as well? The Bold and the Beautiful spoilers state that hot drama’s ahead, so stay tuned. We’ll give you updates as other B&B details emerge. Stick with the CBS soap and don’t forget to check CDL often for the latest Bold and the Beautiful spoilers, updates and news.