The Bold and the Beautiful Spoilers for Next 2 Weeks: Steffy and Hope’s Wedding Battle – Brooke and Taylor Face Off

BY Heather Hughes on May 6, 2018 | Comments: one comment
Related : Soap Opera, Spoiler, Television, The Bold and the Beautiful 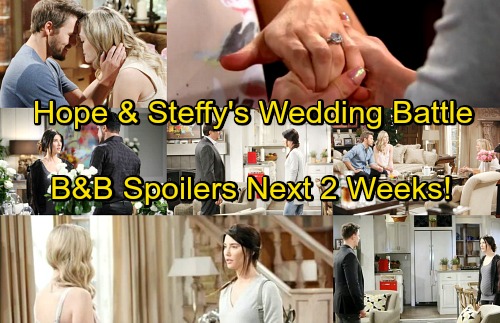 The Bold and the Beautiful (B&B) spoilers for the next two weeks tease that some major wars will go down. The week of May 7-11 will deliver a shouting match between Steffy (Jacqueline MacInnes Wood) and Hope (Annika Noelle). After Hope reveals that she’s engaged to Liam (Scott Clifton), Steffy will blow her top. She’ll rip into Hope for exploiting the situation and push Liam to call off the nuptials.

Steffy will naturally be frustrated when Liam stands his ground. She’ll scramble to fix her relationship before this goes any further. The Bold and the Beautiful spoilers say Wyatt (Darin Brooks) will be summoned for a crucial meeting. He’ll be baffled when Steffy continues to lie about her romance with Bill (Don Diamont). Wyatt won’t understand why Steffy’s so desperate to keep her marriage intact. 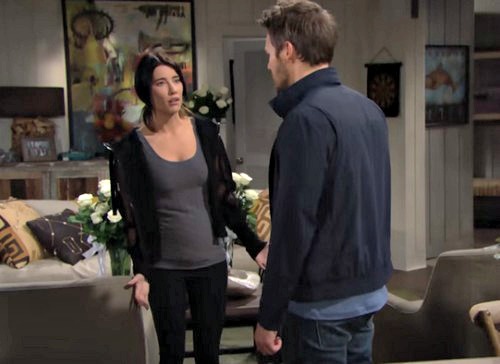 Of course, B&B fans know Steffy’s being honest. She had a one-night stand with Bill, but Liam’s the only man who’s captured her heart. Steffy may not fully convince Wyatt, but her progress will be important later. In the meantime, several other characters will hear “Lope’s” news. Rick (Jacob Young), Maya (Karla Mosley), Brooke (Katherine Kelly Lang) and Ridge (Thorsten Kaye) will all get a shock.

Brooke will support this marriage and insist that when it’s right, it’s right. Maya and Rick might offer their support as well, but they may have concerns about Liam rushing into this. As for Ridge (Thorsten Kaye), he’ll be furious at Liam for ditching Steffy to marry Hope. Ridge will continue to blame himself for bringing Hope back to town. He’ll confront Bill as he struggles to make this right. 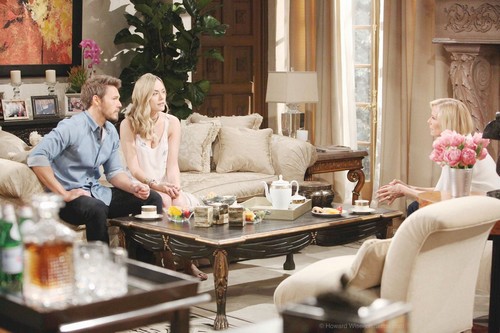 The week of May 14-18 will bring a huge fight between Brooke and Taylor (Hunter Tylo). The Bold and the Beautiful spoilers say they’ll spar over their daughters and which one should be in Liam’s arms. B&B viewers won’t want to miss their exciting faceoff!

Elsewhere, the truth will be revealed to Wyatt. He’ll wise up and realize Bill played him. Wyatt will explode over his father’s sneaky plan, so Bill will get an earful soon. Wyatt will want to fix this, but will Bill let him? Blackmail is a favorite strategy of Bill’s, so we’ll see how it goes.

It sounds like the next two weeks will be filled with entertaining moments. We’ll give you updates as other B&B details emerge. Stay tuned to the CBS soap and don’t forget to check CDL often for the latest Bold and the Beautiful spoilers, updates, and news.