BY Heather Hughes on April 19, 2018 | Comments: one comment
Related : Soap Opera, Spoiler, Television, The Bold and the Beautiful 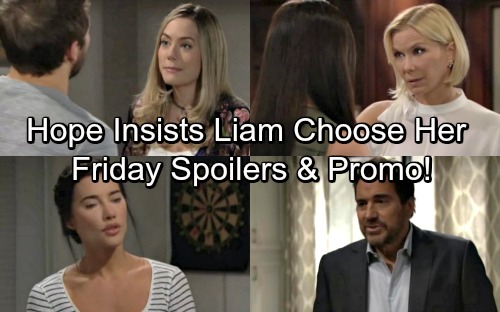 The Bold and the Beautiful (B&B) spoilers for Friday, April 20, tease that Steffy (Jacqueline MacInnes Wood) will lash out at Ridge (Thorsten Kaye). She’ll insist that he shouldn’t have told Taylor (Hunter Tylo) what happened with Bill (Don Diamont). Steffy will argue that Ridge only made things worse by summoning her mother.

Ridge will note that Taylor’s a psychiatrist and knows how to handle situations like this. He’ll suggest that he thought Taylor could help, but Steffy won’t agree. She’ll point out that he lied about Bill sexually assaulting her, but Ridge will probably stand his ground on that. It doesn’t matter how many times Steffy says the sex was consensual. Ridge just can’t seem to accept it! 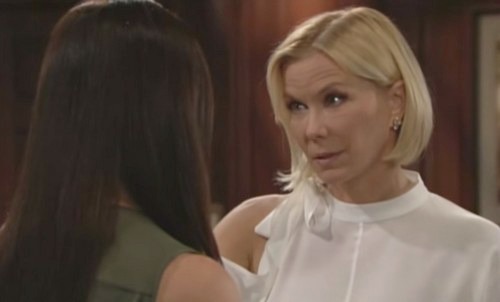 While Steffy blasts her father, Brooke (Katherine Kelly Lang) will comfort her sister. B&B spoilers say Katie (Heather Tom) will open up about the predicament she’s facing. Bill planned to cut Wyatt out of the company unless they ended their engagement. Katie also feared she could lose Will (Zane Achor) in a custody battle, so they took marriage off the table.

Brooke will know that Katie’s hurting right now, but she’ll feel like this is for the best. She might argue that Katie and Wyatt were rushing to the altar anyway. It probably wouldn’t have been wise to tie the knot so quickly.

Katie and Wyatt need time to get to know each other outside of the bedroom. They have loads of fun between the sheets, but can this really be something more substantial? The pressure’s off now, so maybe they can figure that out. 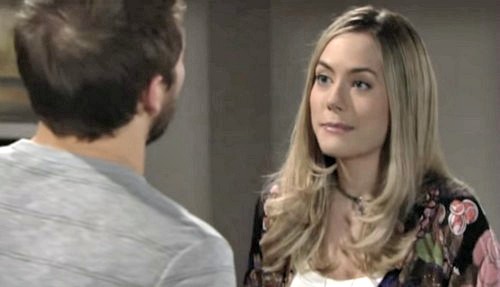 Of course, Brooke may think Katie should explore other options. She could try to plant doubts about Katie and Wyatt having a lasting romance. The Bold and the Beautiful spoilers say Katie will certainly have a lot to think about.

Over with Hope (Annika Noelle), she’ll deliver a passionate speech to Liam (Scott Clifton). Hope will insist that Liam needs to start a new chapter in his life. She’ll think she’s the perfect person to help. B&B fans can expect Liam to remain torn, so this love triangle will stay front and center.