The Bold and the Beautiful Spoilers: Friday, December 7 – Brooke and Ridge Bicker – Taylor and Reese Hit It Off

BY hellodrdavis on December 6, 2018 | Comments: one comment
Related : Soap Opera, Spoiler, Television, The Bold and the Beautiful, Uncategorized 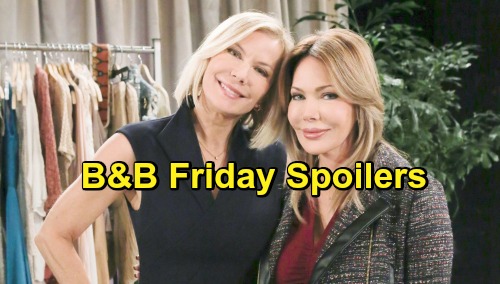 The Bold and the Beautiful spoilers for Friday, December 7, tease that Ridge (Thorsten Kaye) and Brooke (Katherine Kelly Lang) will get into it over some recent events. They’ve each just found out that Taylor (Hunter Tylo) was the one who shot Bill (Don Diamont) earlier this year, and they’ll each have their own take on the matter.

As far as Ridge is concerned, Taylor simply snapped over Bill’s behavior toward Steffy (Jacqueline MacInnes Wood), and he sees her behavior as justified. Sure, he doesn’t condone shooting anyone, but he certainly understands how angry Taylor was about Bill sleeping with Steffy and ruining her marriage to Liam (Scott Clifton). Ridge has felt the same rage toward Bill in the past, so he understands where Taylor was coming from.

But Brooke will see things very differently. She’s agreed to keep quiet and keep Taylor from going to jail over the shooting, but she has serious concerns about Taylor’s mental stability right now. Brooke sees Taylor as a ticking time bomb who shouldn’t be alone with Kelly (Zoe Pennington), in case she snaps again.

Look for Ridge and Brooke to bicker about the situation. They’ll debate just who is more dangerous, Taylor or Bill. And once again, we’ll see them butt heads and fail to resolve anything, which is becoming a typical occurrence in their marriage.

Meanwhile, on the new B&B episode on Friday December 7, Taylor will attend a party at Forrester that Steffy throws for her Intimates line staff. Perhaps Steffy will think it will do Taylor some good to get out of crisis mode and actually do something fun for a change.

Since it’s an Intimates party, it looks like Zoe (Kiara Barnes) will be present, and her dad Reese (Wayne Brady) will show up as well. Zoe may not be too happy to have her dad around, but it looks like Taylor will be delighted to meet Reese. Both Taylor and Reese are physicians, so they’ll have something in common and will hit it off immediately.

It looks like a lot of B&B drama is heating up for Friday’s episode, so stay tuned! We’ll give you updates as B&B news comes in. Stick with the CBS soap and don’t forget to check CDL often for the latest Bold and the Beautiful spoilers, updates, and news.