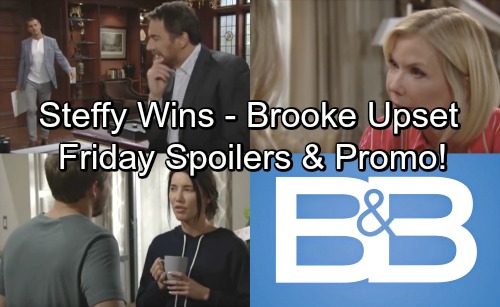 The Bold and the Beautiful (B&B) spoilers for Friday, June 8, tease that Steffy (Jacqueline MacInnes Wood) will marvel at the sudden changes in her life. She’ll suggest that every time she looks at Kelly, she feels something she’s never felt before. Liam (Scott Clifton) will assure Steffy that he feels the same way. Their little girl’s truly the best thing that’s ever happened to them.

Steffy will quickly adjust to her role as a caring mom. Likewise, Liam will love being a doting daddy. They’ll come together and reiterate their commitment as new parents. It turns out Liam wants to make a commitment to Steffy as well. He’ll open up about his split from Hope (Annika Noelle) and insist that their family is what matters now. Liam will let Steffy know that their reunion is finally happening.

B&B fans can expect a proposal in the near future. Liam’s all in on building a life with Steffy and their daughter. The Bold and the Beautiful spoilers say Steffy will be thrilled, but she’ll still show some compassion for Hope. She realizes her rival was also Bill’s (Don Diamont) victim, so it was an unfair situation all around.

Liam will likely point out that Hope’s always been resilient. He’ll just want to enjoy living in the moment with Steffy and their baby. Liam will promise never to take his girls for granted. He understands that Steffy’s truly sorry, so they’re officially moving on as a couple. Kelly will be cared for by loving, united parents.

Over with Ridge (Thorsten Kaye), he’ll have some updates for Thorne (Ingo Rademacher). The Bold and the Beautiful spoilers say Ridge will be excited for “Steam’s” next chapter. He’ll note that Liam spent the night at the cliff house, so that was a nice start. Ridge will feel confident that this is a new beginning for Liam and Steffy.

Brooke (Katherine Kelly Lang), on the other hand, will refuse to let it go. She’ll tell her daughter not to give up, but Hope will disagree with that plan. It’s time to throw in the towel on a “Lope” marriage and focus on finding a different path.

It sounds like some great scenes are coming up. We’ll keep you posted as other B&B news emerges. Stay tuned to the CBS soap and don’t forget to check CDL often for the latest Bold and the Beautiful spoilers, updates, and news.