The Bold and the Beautiful Spoilers: Friday, November 9 – Bill Gets IT Expertise To Bring Down Ridge – Xander Wants Emma

BY hellodrdavis on November 8, 2018 | Comments: one comment
Related : Soap Opera, Spoiler, Television, The Bold and the Beautiful 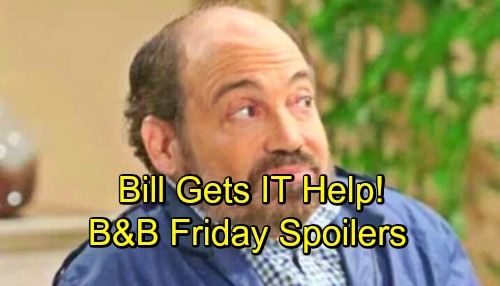 The Bold and the Beautiful spoilers for Friday, November 9, tease that Bill (Don Diamont) will go nuclear in his attempt to find out whether Ridge (Thorsten Kaye) tampered with the judge in the custody case. He doesn’t seem to be getting answers from Brooke (Katherine Kelly Lang), so he’ll try another route.

Bill will figure that if Ridge and Judge McMullen (Joe Lando) secretly communicated, then there might be digital evidence of that communication. He’ll enlist the help of Ken the IT expert (Danny Woodburn), who’ll make an appearance on Friday’s show.

Of course, Ken always has some choice comments to make alongside his technical expertise, so it should be fun to hear him banter with Bill. But will Ken find anything incriminating on Ridge? Ridge was careful to use a secret cell phone for his communications with the judge, but Judge McMullen used his own cell, so he might be able to find something there.

If Ken finds the text conversations between the judge and Ridge, it will be incriminating, but it probably won’t conclusively prove judge tampering. B&B spoilers say that Bill will eventually set a trap for Ridge and Judge McMullen. Will Ken be a part of that setup?

Meanwhile, on the new B&B episode on Friday, November 9, Xander (Adain Bradley) will have a proposal for Emma (Nia Sioux). He’ll want to take steps to move forward with their relationship. Emma’s been pretty insecure lately as she’s seen Zoe (Kiara Barnes) and Xander modeling for the Intimates line, so she should be happy that Xander’s still into her.

But is Emma ready to take her relationship with Xander to the next level? Emma apparently has a history of jealous behavior in previous relationships, and it’s unclear whether she’s actually been in a serious, intimate relationship before. This could be a whole new world for Emma.