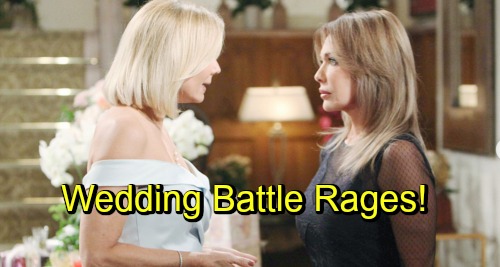 The Bold and the Beautiful spoilers tease that Hope (Annika Noelle) and Steffy (Jacqueline MacInnes Wood) are well-intentioned where their blended family plan is concerned. They are truly looking out for each other’s children, Liam (Scott Clifton), and themselves. However, Taylor (Hunter Tylo) and Brooke (Katherine Kelly Lang) know shared history and see danger coming via Hope’s offer to have Steffy attend Lope’s upcoming nuptials.

B&B appears to be establishing another classic Taylor-Brooke battle. Both parties are combustible, having battled in years past over Ridge (as originally played by Ron Moss and now by Thorsten Kaye), and other issues. Their children, in this instance specifically referring to Hope and Steffy, were often collateral damage of their parents messy, extend storyline skirmishes.

Hope and Steffy have spoken open recently about how they mutually don’t want to repeat the mistakes their mothers made. Instead of warring over Liam, as Taylor and Brooke did with Ridge, they’ve opted to make peace and lay the groundwork for peaceful coexistence.

Liam’s realization that Steffy and Bill’s relationship was non-existent then spurned what seemed like Steam’s cementing. But that didn’t last as further complications eventually resulted in Steffy concluding that Liam loved Hope most.

Interestingly, connected to Liam’s indecision, was the growing respect Steffy and Hope were trying to force into existence between themselves. That felt a bit contrived within the plot, but has served to deliver an engaging storyline space now.

It makes sense to believe that Steffy would recognize reality and go her own way. Similarly, it’s natural to believe that Hope, possessing a softer personality, would be grateful to Steffy, as her choice allowed Lope to revisit their wedding vows.

Hunter and Brooke were shown in comparable scenes where each love of Ridge’s life tried telling her daughter (Taylor to Hope and Brooke to Steffy) that the intended wedding invite wasn’t smart.

Brooke believes, based partly on Steffy’s most recent selfless decision, that she’ll likely behave herself at the wedding. But Taylor is seen as a certain disruptive force. Hope and Steffy disagree, which might be jointly naive, or possibly an accurate prediction.

In either regard, B&B has furthered its highly engaging arcs that connect all noted characters. CDL is a leading source for everything linked to The Bold and the Beautiful. Check back regularly for B&B spoilers and news!