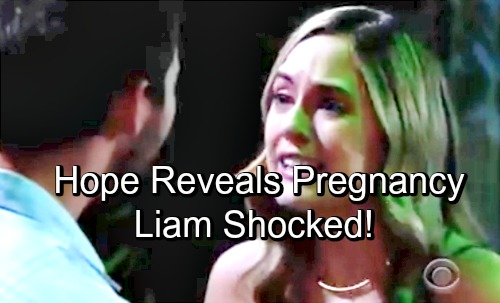 The Bold and the Beautiful (B&B) spoilers and new promo video for the week of July 2-6 tease that Liam (Scott Clifton) will wrestle with a major daddy dilemma. He’s already a proud papa to Kelly, but Hope’s (Annika Noelle) got a bun in the oven as well. She’ll run into some snags as she works to tell Liam, but she’ll get her chance during the Independence Day fireworks. Hope will set off a little baby explosion of her own!

After Liam finds out about Hope’s pregnancy, he’ll find a way to accept the situation. The Bold and the Beautiful spoilers say Hope and Liam will even share a touching moment. They can’t turn back time and undo this mess, so they need to focus on moving forward as parents. Hope and Liam will choose to celebrate the new life they’re bringing into the world.

Liam is certainly a waffler, but he’s not the kind of guy who would abandon his kid. He’ll plan to love this child just as much as the daughter he shares with Steffy (Jacqueline MacInnes Wood). Liam won’t want Hope to feel like their child’s going to be second best. He still cares about her and wants to offer plenty of support.

However, Liam can’t just pretend everything’s peachy keen with Steffy. This is definitely going to rock their world. B&B fans can expect Steffy to fall apart once she hears the pregnancy news. It’ll lead to a heated confrontation with Liam and some tough questions about their relationship.

Over with Ridge (Thorsten Kaye) and Brooke (Katherine Kelly), they’ll enter a war zone. Ridge will want Steffy and Liam to marry as soon as possible. He won’t think Hope’s pregnancy should affect “Steam’s” marriage, but Brooke will argue that everything’s changed. They’ll have a huge fight about which woman Liam’s meant to be with.

Across town, Sally (Courtney Hope) and Wyatt’s (Darin Brooks) romance will balance out all that drama. They’ll be feeling free and fun this Fourth of July. Wyatt and Sally are bound to face problems eventually, but they’ll concentrate on heating things up for now. They’re just loving life and enjoying the spark between them.