The Bold and the Beautiful Spoilers: Justin Points Finger in Wrong Direction – Liam, Wyatt and Sally Not Guilty

BY Sean O'Brien on March 14, 2018 | Comments: one comment
Related : Soap Opera, Spoiler, Television, The Bold and the Beautiful 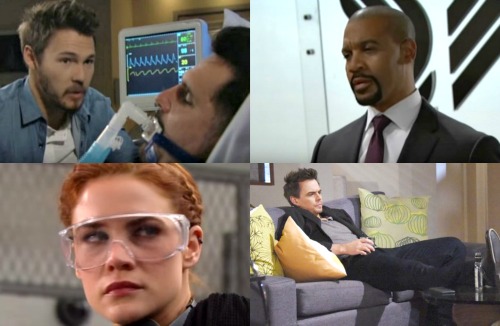 The Bold and the Beautiful spoilers tease that Justin’s (Aaron Spears) efforts to cast aspersions on Liam (Scott Clifton), Wyatt (Darin Brooks) and Sally (Courtney Hope) will fall flat. While such accusations may make him look guilty as well, Justin also won’t be revealed as the person who attempted to kill Bill (Don Diamont).

One of daytime’s better mysteries continues to unfold on B&B. A well-plotted lead-in climaxed recently when many members of the current cast were plausibly set up as suspects in the shooting of this soap’s leading male villain.

This scribe believes that Diamont’s character easily surpasses his Y&R efforts as Brad Carlton, who was also an interesting persona through the end of the last decade. The mind that creates these words is also glad that B&B is apparently using Diamont’s trek to Italy’s version of Dancing with the Stars to enhance Dollar Bill.

While understood as a bad guy, Diamont’s efforts are all the more impressive when one peels the layers of Mr. Spencer. He’s not one-dimensional, but with the wrong casting simply wouldn’t be as effective. No, make that as dominantly effective because Diamont’s consistent performances are ever-impressive.

Liam’s emotional turn back to his dad is a great way to play the developing storyline. Clifton’s character’s obvious feelings suggest that he wasn’t the shooter, unless a dissociative identity disorder is written into this arc.

Wyatt was dead drunk while his dad was being shot in the back with that golden gun. That’s a rather cool piece B&B inserted into the plot by the way. As viewers recall, Bill found it while he was cleaning out his safe and took it home before Sally used it to shoot Sky.

Now, let’s get to Sally-girl, as her Grams (Shirley Spectra, Patrika Darbo) calls her. Does Miss Spectra really look guilty?

Come on, she knew that her fingerprints were on the attempted murder weapon. So why would she have worn gloves, picked up the piece again and shot Bill in the back in his own home? That doesn’t make sense, as the authorities will confirm after clearing her.

As for Justin, he likes the trappings of being Spencer’s top dog. But barking to detective Sanchez (Jeremy Ray Valdez) about the above mentioned characters purely represents conjecture.

Let’s not forget that Justin has also thrown out Ridge’s (Thorsten Kaye) name as a suspect. Marone’s motive, means and opportunity is a topic for another digital feature, as this highly engaging storyline rolls on this March.