The Bold and the Beautiful Spoilers: Katie Sneaks To See Bill – Goes Behind Thorne’s Back To Discuss Will’s Custody 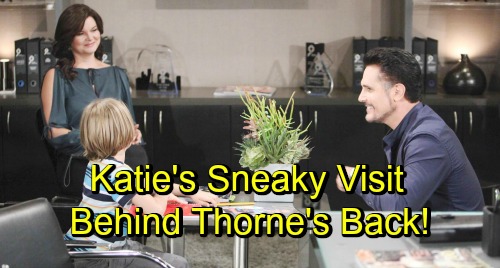 The Bold and the Beautiful spoilers tease that Katie (Heather Tom) will take matters into her own hands. She’s been terrified ever since she found out that Bill (Don Diamont) knows about the custody conspiracy between Ridge (Thorsten Kaye) and Judge McMullen (Joe Lando). Her worst fear is that she’ll be implicated somehow and will lose custody of Will (Finnegan George).

Katie’s also particularly angry with Ridge for interfering in the custody case in the first place. It was Katie’s intention to win or lose her case fair and square, and she’s let Ridge have it on more than one occasion. She’s also unhappy that hubby Thorne (Ingo Rademacher) wholeheartedly supports what Ridge did.

Thorne’s a bit of a problem for Katie. He didn’t engage in the conspiracy as Ridge did, but he backs Ridge’s actions, and he’s always spouting off in front of Bill in a way that clearly makes Katie uncomfortable. Katie’s top concern right now is protecting her custody of Will, and Bill has the power to take that away if he wants.

According to B&B spoilers, Katie will decide to sit down with Bill for an honest chat about Will’s custody and about her feelings on what Ridge did. She’ll want Bill to know that although she found out about the conspiracy and kept quiet, she did not instigate Ridge’s actions and does not support what he did.

Katie will have this meeting with Bill in private, outside of Thorne’s presence. She’ll purposely wait until Thorne goes to work to meet with Bill, and it looks like she’ll keep Thorne in the dark about the meeting. She’ll probably want to make sure that the discussion is civil, and that wouldn’t be possible with Thorne there.

Does this signal a lack of trust between Katie and Thorne? It could be the beginning of the demise of their relationship. Thorne probably won’t be too happy when he finds out that Katie went behind his back to have a major discussion about Will with Bill. We’ll see what happens there.

Do you think Katie’s making the right move by seeing Bill privately, without Thorne present? Stay tuned to the CBS soap and don’t forget to check CDL often for the latest Bold and the Beautiful spoilers, updates, and news.