The Bold and the Beautiful Spoilers: Liam and Steffy Fierce Fight Over Taylor – Kelly At Risk As Granny Spirals Out Of Control

BY hellodrdavis on November 25, 2018 | Comments: 2 comments
Related : Soap Opera, Spoiler, Television, The Bold and the Beautiful 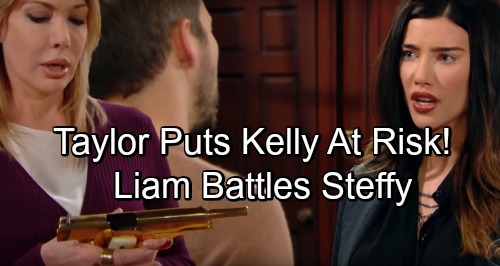 The Bold and the Beautiful spoilers tease that Steffy (Jacqueline MacInnes Wood) and Liam (Scott Clifton) will have their first co-parenting spat, and it will be a doozy. Taylor (Hunter Tylo) is about to come back into their lives, and she’ll be behaving erratically.

Taylor’s been a bit unstable for a while now. Who can forget the cake fight she started with Brooke (Katherine Kelly Lang) at Hope (Annika Noelle) and Liam’s wedding reception? And of course before that, Taylor shot Bill (Don Diamont) in the back.

Taylor has been supposedly getting therapy for her behavior, but it doesn’t look like it has helped much. Once she’s back on the scene, she’ll start ranting again about how Hope stole Liam and how Hope is living the life that Steffy should be enjoying. The whole issue upsets Taylor terribly.

Taylor’s instability will really worry Liam after she verbally assaults Hope at Forrester. Liam will walk in on Taylor accusing Hope of stealing Steffy’s office and her husband, and Liam will fortunately put a stop to it. But he’ll start thinking about unhinged Taylor is and whether she should really be spending time with Kelly (Zoe Pennington).

This will lead Liam to approach Steffy with concerns about Taylor’s stability. But B&B spoilers say that he and Steffy won’t see eye to eye on the issue, as Steffy defends Taylor. It seems that Steffy will see her mom’s behavior as simply protective, whereas Liam see it as a warning sign.

Liam and Steffy will also disagree about Taylor’s role in Kelly’s life. Liam may worry about whether Taylor might do something to harm Kelly if she was backed into a corner. He might argue that Taylor’s visits with Kelly should always be supervised. Steffy will probably think that Liam is over-reacting, and she might be angry that Liam is thinking the worst of her mother.

At any rate, Liam and Steffy will have a lot to work through to resolve this issue. And Hope may want to weigh in on the matter as well, which might serve to escalate the situation further. Co-parenting isn’t easy, and this will be the first real test of Steffy and Liam’s co-parenting skills.

Do you think Taylor is a danger to Kelly? Stay tuned to the CBS soap and don’t forget to check CDL often for the latest Bold and the Beautiful spoilers, updates, and news.