BY hellodrdavis on November 15, 2018 | Comments: one comment
Related : Soap Opera, Spoiler, Television, The Bold and the Beautiful 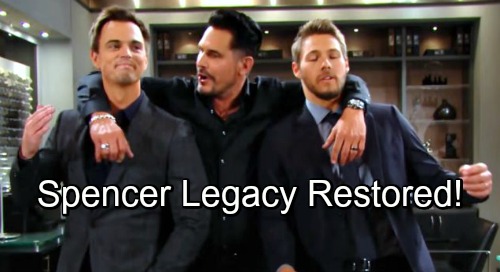 The Bold and the Beautiful spoilers tease that Bill (Don Diamont) will get some hope for a renewed relationship with his adult sons for the holidays. Things have been strained between Bill, Liam (Scott Clifton), and Wyatt (Darin Brooks) for a while now. Bill not only slept with Steffy (Jacqueline MacInnes Wood), but he used Wyatt to spread vicious lies about her, resulting in the destruction of Liam and Steffy’s relationship.

But recently Wyatt and Liam have been softening a bit toward their dad. They went into protective son mode when Bill fell off the balcony after a fight with Thorne (Ingo Rademacher) and Ridge (Thorsten Kaye). Both had touching words for their dad as he fought to regain consciousness.

And Liam and Wyatt also felt for their dad during the custody dispute. They both really seem to want Bill to have a good relationship with Will (Finnegan George) and hope that Bill can be a good, loving father going forward.

It looks like Bill and his adult sons will have some touching moments this holiday season. As Liam and Wyatt spend the Thanksgiving holiday at the Forrester mansion, they’ll naturally wonder about their dad and what he’s doing for the day. It may hurt them to think of their dad all alone.

At some point, though, the three of them will get together and Bill will have an important announcement to make. He’ll have been thinking about the Spencer legacy and how he cut his sons out of his life, business, and fortune. It looks like Bill will make a gracious offer, perhaps to give Liam and Wyatt their rightful inheritance with no strings attached.

The three men will share an emotional moment together, and it looks like they’ll be on the path to healing. It will take some time, but eventually maybe the relationships between them can be restored and the wrongs forgiven. Bill seems determined to prove that he means it about his new outlook on life, and Wyatt and Liam would certainly love to believe that he’s serious.

Do you think Bill and his sons can repair their relationship? Stay tuned to the CBS soap and don’t forget to check CDL often for the latest Bold and the Beautiful spoilers, updates, and news.