BY Sean O'Brien on May 15, 2018 | Comments: one comment
Related : Soap Opera, Spoiler, Television, The Bold and the Beautiful 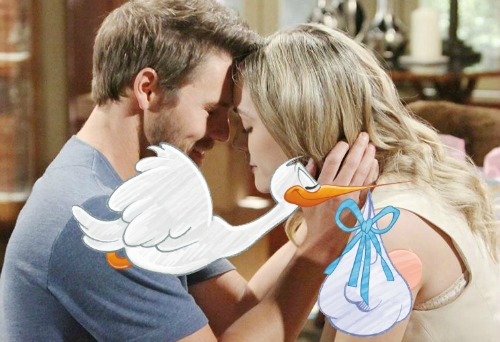 The Bold and the Beautiful spoilers tease that Hope (Annika Noelle) could soon learn that she’s pregnant. Yes, Liam (Scott Clifton) would be the father. This development would then serve to neutralize Steffy (Jacqueline MacInnes Wood) indefinitely.

Some guy needs to be really, really weak in order to have his wife knowingly choose to have relations with his father. Yet, that’s what Little Lord Liam did in enabling the scenario that played out at the Forrester mansion guest house last fall.

Digitally skip to a cold night this spring on the upper crust side of Los Angeles, in Brooke’s museum-like log cabin. There Liam and Hope laid on the floor in front of the engaging fireplace and made love. Liam took that plunge while still legally married to Steffy, who is likely pregnant with his child.

Likely? Well, Bill (Don Diamont) is capable of anything. So he easily could have (or did) manipulate the DNA test results that Liam accidentally read which confirmed Clifton’s character was, supposedly, the father of the daughter Steffy is scheduled to deliver this summer. Seasoned B&B fans got all that. It’s okay if newer devotees re-read this paragraph.

The proposed idea of Hope now being pregnant with Liam’s child would propel what already is a wild arc into weirder and even more delicious territory. Along with those aspects would be the tension tease of Steffy being permanently neutralized by her returned nemesis.

Hope is hardly the mousey lady that her voice and demeanor suggest. Instead, she’s actually a passive-aggressive personality type who played a surgical game and has likely won.

Subjective arguments for either woman’s cause can be made. So too can suggestions about why either person would want to be with Liam, or would want to pursue that emotional logic even when the other’s counterpart is in the picture. Yet hearts want what they want.

Imagine Liam’s face when he learns that he’ll be a daddy twice within a period of months and from not one, but two women whom he simultaneously loves. Considering all that’s happened, the idea of these three people and their two babies living together also wouldn’t be far-fetched. Some future crisis would necessitate that. But we must circle back to the nugget about Dollar Bill now.

If Hope isn’t pregnant, then Liam might only be a dad once, or maybe not at all. Bill took control of Steffy that one fated night late last year. Now, will he also assume the daughter Liam believes he and Steffy are having?

If Bill is actually the expectant father and Hope does deliver somewhere around the intersection of 2018 and 2019, Liam would still be a dad after all. Yet it would be more B&B’s style to have Clifton’s ever-conflicted man become a dad this summer and next winter. CDL is a leading source for everything linked to The Bold and the Beautiful. Check back regularly for B&B spoilers and news!