The Bold and the Beautiful Spoilers: Liam Finds Way Back To Steffy – Raise Baby As Devoted Couple

BY Sean O'Brien on February 5, 2018 | Comments: one comment
Related : Soap Opera, Spoiler, Television, The Bold and the Beautiful 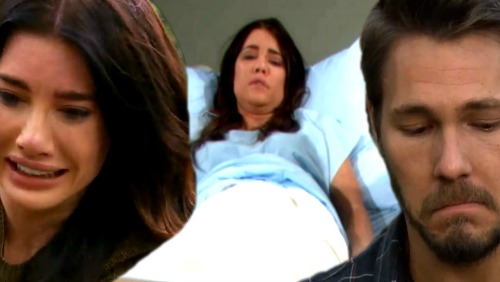 The Bold and the Beautiful spoilers tease that Liam (Scott Clifton) may not find a way to attend Ridge (Thorsten Kaye) and Brooke’s (Katherine Kelly Lang) wedding but he will find his way back to Steffy. Steffy (Jacqueline MacInnes Wood) smartly made her way to her still-husband’s hideout and pitched the idea that Bridge proposed to this currently split couple. When the big day arrives, he might be there though Leffy’s reconciliation will remain a dream.

Give Steffy credit, she’s owned what happened. Liam’s wife hasn’t taken what would have been an easy road. She could have said that Bill (Don Diamont) wronged her on that now infamous night in the Forrester guest house. But Steffy didn’t do that because she’s honest.

When asked by various people and as asserted by her dad as fact on many occasions, Steffy said that she engaged in a consensual act with Bill. She’s also admitted that she doesn’t know why she did that, which is intriguing.

Leffy fans are right to wonder if Steffy has latent feelings for her father-in-law? That wouldn’t be far-fetched based upon her history with Bill. Whether that leads anywhere in the future can’t be known at this point, though Steffy has offered a strong know to Bill when he offered his love.

There is no right approach to addressing the problem that now exists between Liam and Steffy. However, no one can honestly argue against continued communication.

Everyone in Los Angeles has seemingly spoken to both parties. Why so many people needed to know that Bill was the man Steffy slept with is somewhat soapy, but also plausible considering all character’s personality types and this particular arc.

Liam is the victim in this storyline. Yes, he made a mistake by returning Sally’s (Courtney Hope) kiss under the rubble of the Spectra Fashions fallen building. But that didn’t give Steffy license to cavort with Bill and nearly conceive what would have been another Spencer heir.

Accurate analysis also involves heart, rather than just logic. Liam has earned compassion and kudos. He’s been civil to everyone but Bill, while also remaining fully interested in his baby. Like Steffy said, her actions have denied him what should have been a joyous time in his life during the first few weeks of his child’s life.

The sad puppy dog face Clifton has evidenced since all was revealed won’t leave anytime soon. But baby steps leading into Leffy’s baby’s birth later this year leaves plenty of time for healing and maybe, this couple’s revival.