The Bold and the Beautiful Spoilers: Liam is Kelly’s Father, NOT Bill – Scott Clifton Confirms on Social Media 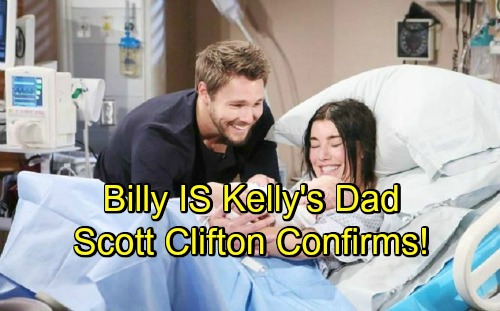 The Bold and the Beautiful spoilers tease that Liam (Scott Clifton) and Steffy (Jaqueline MacInnes Wood) are in for some tense times ahead with Bill (Don Diamont). Bill is determined to cause trouble for Steam any way that he can, and we’ll see him continue to interfere in their relationship as time goes on.

One thing that many B&B viewers have been fearing is that Bill will be revealed as Kelly’s biological father, which would of course devastate Steam. Viewers will remember that Bill turned up at the hospital on the day that Steffy got her paternity test results.

This has led to much speculation that Bill may indeed be the father but bribed Steffy’s doctor to change the test results so that Liam was listed as the father. Now that things have changed and Bill wants Steffy, he could reveal himself as the daddy.

But Scott Clifton recently spoke out on the matter of Kelly’s paternity on his Twitter account. In response to a thread concerning the possibility that Kelly is Bill’s child, Scott pointed out that there was a Steam love scene a couple weeks before Steffy’s one-night stand with Bill. 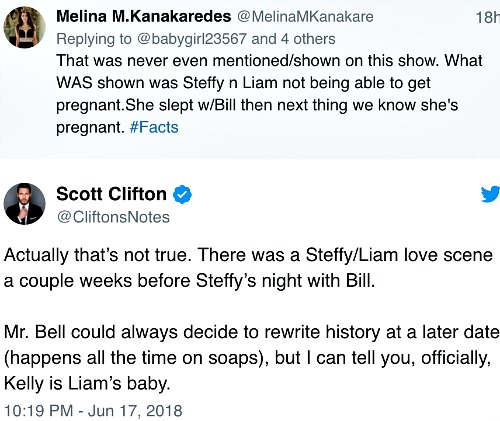 Scott went on to state that “Mr. Bell could always decide to re-write history at a later date (happens all the time on soaps), but I can tell you, officially, Kelly is Liam’s baby.” Talk about words that Steam fans have been waiting to hear!

Of course, just because Liam is Kelly’s father doesn’t mean Bill won’t try to use Kelly to disrupt Steam’s lives. Bill may demand access to his granddaughter, which Steam probably won’t want to grant him. And he could always trick Steam into believing that Kelly is really his.

Bill could pay off someone at the hospital to “discover” that the original paternity test was flawed. This would give Bill access to Kelly, and to Steffy, which is what he really wants.

Do you think that Bill will try to mess with Kelly’s paternity results and position himself as Kelly’s father? Stay tuned to the CBS soap and don’t forget to check CDL often for the latest Bold and the Beautiful spoilers, updates, and news.

Actually that’s not true. There was a Steffy/Liam love scene a couple weeks before Steffy’s night with Bill.

Mr. Bell could always decide to rewrite history at a later date (happens all the time on soaps), but I can tell you, officially, Kelly is Liam’s baby.