The Bold and the Beautiful Spoilers: Liam’s A Spoiled Man-Child – He’s The Problem, Not Bill, Steffy or Hope

BY Sean O'Brien on April 9, 2018 | Comments: one comment
Related : Soap Opera, Spoiler, Television, The Bold and the Beautiful 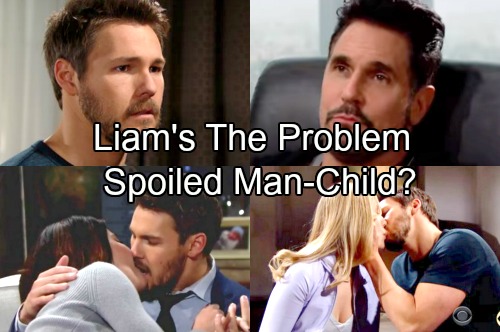 The Bold and the Beautiful spoilers documented Liam’s (Scott Clifton) consistent inconsistencies. He’s spent plenty of time blaming his father and then Steffy (Jacqueline MacInnes Wood) for all real and perceived wrongs. But Liam has never taken full responsibility for his uneven personal and business dealings.

Who allowed himself to be swayed away from Hope (then played by Kim Matula)? Who pushed the woman who he went to, Steffy, to later be conflicted because he was fully invested in Sally’s (Courtney Hope) world?

The answer to both questions above isn’t Dollar Bill (Don Diamont). No, no, no, it’s the one and only Little Lord Liam. Entitled boy-man who believes he has values and the application of them upon everyone will allow Mother Earth to change.

Old-fashioned minds like Liam’s believe they are evolved. Instead, their condescending view of reality sees others as preening kings saw their subjects in days gone by.

Bill is a flawed guy. It’s not Liam’s job to fix him, nor is the younger Spencer capable of even making a dent in his dad’s busted window of a soul. And that’s the problem Liam has. He’s incapable of controlling his reaction to Bill and to the Bill’s of the world.

Adults learn over time and various individuals at varying rates that people are who they are due to their own life experiences. Family members, friends, acquaintances, strangers, or whoever aren’t projects. They are human beings living on top of a collective, subjective rock.

If Liam would have recognized that he was far too involved with Sally early on, Steffy wouldn’t have spent so much time with Bill. Liam set that reconnection in motion.

But Liam also doesn’t learn from recent mistakes. Now, despite the fact that Steffy’s pregnant with his child, he’s allowed Hope (Annika Noelle) to persuade him. He just mouthed Hope’s hope to his wife that she and Bill develop their one-night fling into marriage.

All the while Liam has the full luxury of not needing to earn money. Who has been paying his bill at that hotel? Bill. Whose efforts allow Liam to have walked away from his only job? Bill. Who reeled him into Hope for the Future purely to sink her holier than though hooks into his heart? Hope.

Much of this article reads as though Liam is a high school freshman, with his dad and two girlfriends ruling his reality. Well, if one plays the clown it stands to reason that many observers will call you out. Hey Liam, grow up! CDL is a leading source for everything linked to The Bold and the Beautiful. Check back regularly for B&B spoilers and news!